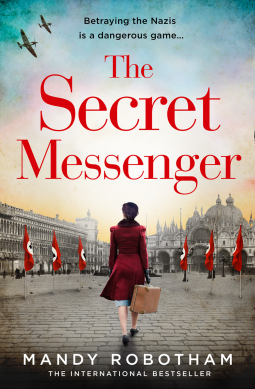 The Secret Messenger by Mandy Robotham
Publisher: Avon Books UK
Release date: 12 December 2019
Back cover blurb: Venice, 1943. The world is at war, and Stella Jilani is leading a double life. By day she works in the lion’s den as a typist for the Reich; by night, she risks her life as a messenger for the Italian resistance. Against all odds, Stella must impart Nazi secrets, smuggle essential supplies, and produce an underground newspaper on her beloved typewriter. But when German commander General Breugal becomes suspicious, it seems he will stop at nothing to find the mole, and Stella knows her future could be in jeopardy… London, 2017. Years later, Luisa Belmont finds a mysterious old typewriter in her attic. Determined to find out who it belonged to, Luisa delves into the past and uncovers a story of fierce love, unimaginable sacrifice and, ultimately, the worst kind of betrayal… Set between German-occupied 1940s Venice and modern-day London, this is a fascinating tale of the bravery of everyday women in the darkest corners of WWII, for readers of The Tattooist of Auschwitz by Heather Morris.

1943, Stella Jilani is living a double life. By day she work's as a typist/translator for the Reich in occupied Venice. By night she is a prominent member of the resistance working as a typist/journalist and messenger.

In 2017 Luisa Belmont is clearing the house after her Mothers' passing, when she finds a mysterious old typewriter. She is inexplicably drawn to the object and determined to find out who it belonged to. As she knows for sure that it wasn't her Mother's.

Her quest for information leads her to Italy, where she begins to unravel the complex origins of the typewriter and it's previous owner, and discovers far more than she ever dreamed possible.

Luisa's grandmother, Stella was in a member of the resistance during the Second World War, working for the Reich during the day, and rebelling against her bosses by night. She risks her life every single day for the war effort, and her family have no idea.

Luisa also makes another discovery, when she finds an old photo of her Grandmother and this leads to even more questions about her Grandmother's life, both during and after the war.

The Secret Messenger is a thrilling read, with brilliant characters, and I cannot wait for Mandy Robotham's next!


The Secret Messenger is available now via Amazon online and all good book shops.