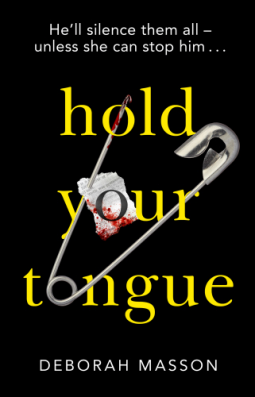 Back cover blurb: A brutal murder. A young woman’s body is discovered with horrifying injuries, a recent newspaper cutting pinned to her clothing. A detective with everything to prove. This is her only chance to redeem herself. A serial killer with nothing to lose. He’s waited years, and his reign of terror has only just begun . . . Introducing DI Eve Hunter, HOLD YOUR TONGUE is your new obsession.

Eve has only just returned to her role after a serious injury has prohibited her from working. Her colleague Sanders is now confined to a wheelchair and unable to walk, whilst DI Hunter's leg is still giving her trouble.

But there is a murderer on the loose, and DI Hunter has the skills and expertise to bring them to justice. It just needs to be quickly, as they appear to be a serial killer with an insatiable appetite.

The first victim, a young woman has had her tongue cut out by the murderer (hence the novel's title) and is one of the most gruesome crime scenes DI Hunter has ever encountered (welcome back!!), she knows that she must act quickly to bring together a resolution as the press are scrutinising her return to the force with every move she makes.

Hold Your Tongue is a fast paced debut, and I look forward to reading the author's next.

Hold Your Tongue is available now via Amazon online and all good book shops.