Review - When We Were Brave by Suzanne Kelman 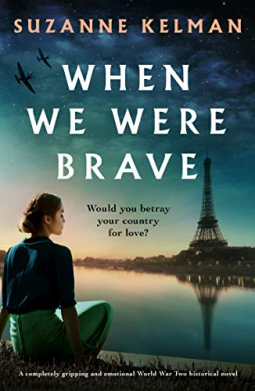 When We Were Brave by Suzanne Kelman

Publisher:
Release date:
Back cover blurb: 1944, Cornwall: Blinded by love, Vivienne Hamilton eloped to Paris with a Nazi prisoner-of-war, never to be seen again. A disgrace to her family, her name would not be mentioned by any of her relatives for over 75 years. Present day, London: When Sophie discovers a photograph of her great aunt Vivi from World War Two, it throws her into a world of confusion. Because, as she learns about this secret relative, she quickly realises that the photograph doesn’t fit with her family’s story. It shows Vivi leaving an address associated with a spy network in London – a place she had no reason to be – and it is dated right before she disappeared. Meanwhile Sophie’s own life feels as blasted and bombed as the blitzed city in the photograph she’s looking at. Her beautiful daughter – as full of joy and wild energy as Vivi had apparently once been – is gone; and Sophie’s heart has been left broken into pieces. Retreating to the family home in rural Cornwall to seek solace from her pain and the feelings of guilt that she could have done more to protect her daughter, Sophie finds herself becoming obsessed with Vivi’s life. But nothing can prepare Sophie for what she is about to uncover – the story of a woman who risked everything for the person she loved the most; and a secret family history that could be the key to Sophie’s own future.

Vivienne Hamilton is young, beautiful and slightly naive when she is sent to France in the midst of World War II.  A top secret member of SOE, she is determined to do her bit for the War effort and stop the Nazi's invading her beloved Blighty.

But her position is compromised, meaning that she must be sent back to Britain. She is devastated and still determined, so she retrains as a Nurse at the family home in Cornwall, where she meets and falls in love with an injured young man.

In the present day, Sophie is exhibiting at the imperial war museum, when she comes across a woman in a photograph that looks eerily like her Mother. She knows that it must be someone in the family, but she cannot recall ever seeing a photograph of the young woman before.

After liasing with her Grandmother and her family in Cornwall, Sophie discovers the woman's identity. Vivienne Hamilton, her great aunt. Lost to the war, but never spoken of in family circles.

'Villainous Vivienne' as she was christened by her family supposedly run off with the enemy (a high ranking Nazi officer) to France, never to be seen again.

The photograph itself makes no sense though, as it shows Vivienne leaving SOE HQ in London long after her return from France.

Sophie, a romantic at heart, is certain that there must be more to the story, and she deals with her own losses, her great aunt's story becomes critical to her recovery.

When We Were Brave is a wonderfully researched, beautifully written novel, and I look forward to the author's next.


When We Were Brave is available now via Amazon online and all good book shops.