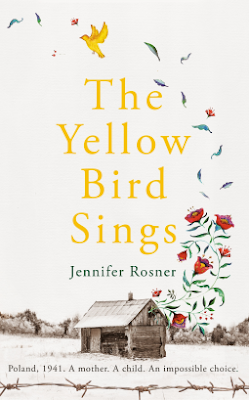 Back cover blurb: A powerfully moving and utterly gripping debut novel about a mother and daughter forced into hiding at the height of WWII, and the bond between parent and child that can never be broken. Poland, 1941. Roza and her five-year-old daughter, Shira, are the only surviving Jews in their town. They spend day and night hidden in a neighbour’s barn. Forbidden from making a sound, only the yellow bird from her mother’s stories can sing the melodies Shira composes in her head. Roza does all she can to take care of Shira and shield her from the horrors of the outside world. They play silent games and invent their own sign language. But then the day comes when their haven is no longer safe, and Roza must face an impossible choice: whether the best thing she can do for her daughter is keep her close by her side, or give her the chance to survive by letting her go...

Poland 1941, Roza and her five year old daughter Shira are the only surviving Jew left in their town. They are forced to hide in the barn of a neighbouring farm. Roza suspects that he has an ulterior motive for allowing them to stay, and it doesn't take long for her suspicions to be proven, for Roza will do anything to keep her daughter safe.

Shira is too young to understand the danger that they are in and doesn't understand why they are cramped into the smallest of spaces and forced into silence for most of the time. Shira has a musical mind, and misses the music her family played around her before the others were taken from the family home.

Inspired by her Mother's whispered stories to her, Shira imagines that she has a small yellow bird, an imaginary pet that she must take care of. This helps her to keep silent, as she must to avoid discovery. Several months pass without incident, and Roza almost believes that they could make it to the end of the war, but that sadly is not to be.

As the Nazi's begin to acquire barns for storage, the Farmer is forced to put his own life and family first. But his wife knows of a hidden network to help Jewish children. And Roza is forced to make the heartbreaking decision to send Shira to a convent school, where Shira will be disguised as just another Catholic girl, and looked after by the Nuns.

Shira doesn't understand, and believes that her Mother will come for her. However, she eventually settles in to life at the Convent school, and is looked after and looked out for by a few kind Nuns who are risking their own lifes to keep children like Shira hidden.

The Yellow Bird Sings is a beautifully written novel, about the heartbreaking decisions that sometimes have to be made to protect those what we love, particularly during war time. I don't want to spoil anything, so I can't say too much more, but I highly recommend this wonderful novel.

The Yellow Bird Sings is available now from Amazon online and all good book shops.