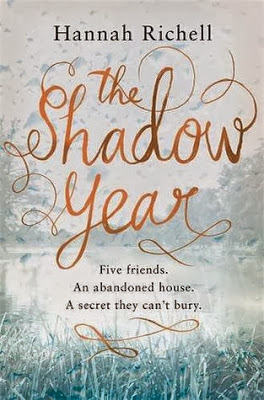 The Shadow Year by Hannah Richell

Back cover blurb: 1980. On a hot summer's day five friends stumble upon an abandoned cottage hidden in the English countryside. Isolated and run-down, it offers a retreat, somewhere they can escape from the world. But as the seasons change, tensions begin to rise...

Three decades later, Lila arrives at the remote cottage. Bruised from a tragic accident and with her marriage in crisis, she finds renovating the house gives her a renewed sense of purpose. But why did the cottage's previous inhabitants leave their belongings behind? And why can't she shake the feeling that someone is watching her?

I bought this book on impulse at the airport just before jetting off to Gran Canaria recently, I'm so glad that I did. I had seen it fluttering about on my Twitter time line for a while, and it was on my 'to read' list, I just hadn't gotten around to it. How I kicked myself for not picking it up sooner.

The Shadow Year is told from two main points of view, that of Kat and her university friends, Simon, Carla, Ben and Mac in 1980, and that of Lila, Thirty years later.

I sensed almost immediately that the stories were intertwined somehow, but the author managed to keep me guessing right up until the end.

The first person that we meet in the book is Lila, we learn that she suffered a recent miscarriage in fairly mysterious circumstances. Although she is crippled by her own guilt, she also has a nagging feeling that things are not as they seem. Was there another person involved? Or is Lila driving herself slowly mad with grief?

Lila inherits a cottage in the middle of nowhere. Her father is the only person close to her that has passed away recently and she cannot imagine that he has left it to her. So where did such a gift come from?

It's a question you will be asking yourself until quite a way into the book, when the some pieces of the puzzle start to fit together. Although just like a real puzzle, they may not all fit into the exact place you think they should.

We meet Kat and her university friends just as they are looking for an adventure, they have come to the end of their respective courses, and don't necessarily want to 'settle down' in to the 'real world' just yet. Mac suggests a day trip to a cottage he visited once.

Simon as the unspoken leader of the group takes it upon himself to lure the group away from everyday life, and into commune style basic living. Kat is the first to agree, for she is deeply in love with Simon. Young and impressionable, and not wanting to work for a living just yet, the others all follow.

All is fine and dandy, until the arrival of Kat's sister Freya. Her appearance kicks off a chain of events that shape the future of the group and their lives ahead.

I can't really say much more without giving away some of the (brilliant) plot. The book is full of suspense, without being predictable, it's characters at times both endearing and frustrating. If I ever do manage to write that book that I keep threatening, I would want it to be like this. I urge you to read it as soon as you can.

The Shadow Year is available online from Amazon and all good book stores.