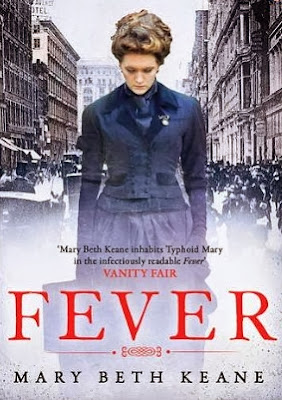 Back cover blurb: They called her Typhoid Mary. They believed she was sick, that she was passing typhoid fever from her hands to the food that she served. They said she should have known. But Mary wasn't sick. She hadn't done anything wrong. She wasn't arrested right away. There were warnings. Requests. And when she was finally taken, she did not go quietly. Branded a murderer and condemned by press and public alike, Mary continued to fight for her freedom, no matter the cost. Mary Beth Keane's fictional account presents us with a very cleverly wrought conundrum: was Mary Mallon a selfish monster or a hounded innocent?

I had quite high expectations for this book and I was left really disappointed. I love historical fiction and have read some real gems in the past. I expected this to be one to add to the list, sadly it wasn't to be.

Fever is the fictional 'biography' of Mary Mallon (or Typhoid Mary as she became known), the first person in America identified as a healthy carrier of Typhoid Fever. Mary seemingly has no idea that she is a carrier of the disease until her world is turned upside down by George Soper, a sanitation engineer investigating outbreaks of Typhoid in New York and the surrounding areas.

I felt that the events surrounding Mary's arrest, hospitalisation and eventual quarantine on North Brother Island were quite long and drawn out. It must have been terrifying to go through such an ordeal, but all Mary seems to do is moan, rather than appear afraid or upset. Perhaps that is the kind of woman she was, and maybe that's what the author was trying to portray, but it just didn't seen very 'real' to me. None of it did really.

I understand that the point of the book was to tell the historic tale from Mary's point of view, but I can't help thinking it would have been beneficial if we had access to the opinions of some of the people that Mary came in to contact with, George Soper in particular. I think it might have made the book a little more interesting. For although it should have been a fascinating subject, I'm afraid to say I found the book quite slow and rather boring.

I also felt that the book was overshadowed by the dysfunctional love story of Mary and Alfred which added absolutely nothing to the story, and would have been much better left out. Although again, perhaps this would have been more interesting if Keane had added Alfred's point of view? I'll guess we'll never know.
I didn't hate the novel, but I certainly didn't love it either, hence the two stars. I do wonder whether this book may have been better as a non fictional account of Mary's life, or whether I'm being too harsh?

Maybe try it out for yourself and see what you think...