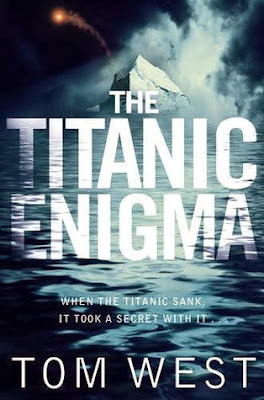 Back cover blurb: When the Titanic sank, it took a secret with it... In the vast expanse of the Atlantic, 375 miles off the coast of Newfoundland, a ship's crew film an extraordinary event: the ocean, covered with millions of floating fish, bubbles as though boiling. Then an enormous whale roars through the water and crashes down, dead, onto the surface. Some 13,000ft beneath - at the precise coordinates  - lies the wreck of the Titanic. Within twenty-four hours the footage has become a global phenomenon. Commander Jerry Derham, charged with investigating the incident, rushes to see marine archaeologists Kate Wetherall and Lou Bates. The one-time couple specialise in deep-sea diving and the scientific study of shipwrecks. Jerry needs to get the pair down to the ocean floor - fast. None of them are prepared for what they find there...(contd)

This novel was much more gripping than I expected it to be. I bought it because I love a good book about the Titanic, fictional or not, it's one of those subjects that I find fascinating. I wasn't entirely sure what to expect, from the 'blurb', but be assured if it's a fast paced thriller that you're after, then this definitely falls in to the category.

The novel opens with the scene described via the back cover, a ship's crew discover something that shocks them to the core. The story that follows reveal the consequences of what they saw. It is much more than any of them could ever have imagined.

The wreck of the Titanic has become a radioactive source - but it is natural or man made? Commander Jerry Derham is sent to find out, and he enlists Kate and Lou renowned marine archaeologists to help him.

As the back cover blurb suggests, Kate and Lou were once a couple, it's clear throughout the novel that they both have feelings for each other, but these are largely ignored, which I liked, I didn't want it to turn into a sappy love story.

As they set out to uncover the mystery, we are taken back to 1912, the year of the Titanic disaster, through flashbacks we are woven even deeper into the mystery. But it doesn't become confusing, only more intriguing.

I haven't read anything by Tom West or Michael White before (Tom West is a pseudonym ) but he's an author now on my radar, and I look forward to reading the next Tom West in 2014.

You can buy The Titanic Enigma online from Amazon and all good book shops.