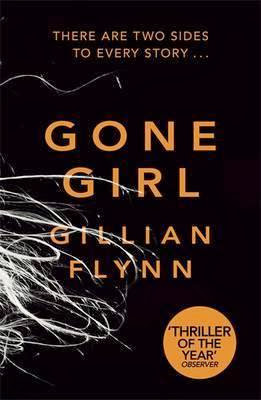 What have we done to each other?

These are the questions Nick Dunne finds himself asking on the morning of his Fifth wedding anniversary, when his wife Amy suddenly disappears. The police suspect Nick. Amy's friends reveal that she was afraid of him. He swears it isn't true. A police examination of his computer shows strange searches. He says they weren't made by him. And then there are the persistent calls on his mobile phone.

So what did happen to Nick's beautiful wife?

I started reading Gone Girl against my better judgement. I don't usually read books purely because others say that I should. I take gushing reviews with a pinch of salt and prefer to make up my own mind if I should chose to read the novel.

The novel itself has been compared quite a lot to ASA Harrison's silent wife. After reading both books I don't really see how they can be compared. The obvious comparisons are the marriage/relationship breakdown and the his/hers points of view, for me that's where the similarities end. The novels are telling totally different stories.

From the very first page I had made up my mind about what sort of person I thought Nick was. I felt real disgust for Nick, hatred almost until the dramatic twist in "part two".

I'm skipping ahead... Let's discuss the outline of the novel - at least as much as I can without giving anything away.

Amy and Nick are about to celebrate their fifth wedding anniversary. Amy clearly adores Nick, and we believe that the feeling is mutual, at least for the first parts of the novel. Although Nick is acting slightly strangely on the morning on their anniversary we do not believe it to be anything sinister, until he finds out that Amy is missing. Under very murky and disturbing circumstances. Oh, and he now hates his wife.

Part One leads us to believe that Amy is very much the victim (whether alive or Dead) and Nick the guilty party, until the latter parts (two and three) begin to unravel literally everything that you have already made your mind up about. It's frustrating but brilliant all at once.

I can see why some have criticised the novel, it's not everyone's cup of tea. I ended up not liking Amy or Nick much by the end of the book, but I guess that's the whole point. We don't have to like the characters. It's probably better that we don't-Both are them are psychologically unstable from their relationships with their parents. Both of them have differing opinions on how marriage should work, and how they should act with each other to make marriage work. Both of them are nasty pieces of work in their own way. But that's what makes it so compelling.

What are they going to do next?

I don't want to give anything much away, so that's not much more I can say, except that I liked it more than I wanted to, or thought that I would.

It's a disturbing read and I'm still not sure about the ending, but I'm still thinking about, which I guess from the authors point of view is a good thing. Also despite its success I hear that Gone Girl is not Flynn's best... So I'm going to track down her other 2 novels and give them a go.

You can buy Gone Girl online from Amazon and all good book shops.