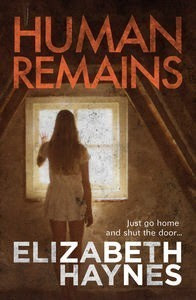 Human Remains by Elizabeth Haynes
Publisher: Myriad Editions
Release Date: 14th February 2013
Rating: ****
Back cover blurb: How well do you know your neighbours? Would you notice if they lived or died?
Police analyst Annabel wouldn't describe herself as lonely. Her work keeps her busy and the needs of her ageing mother and her cat are more than enough to fill her time when she s on her own. But Annabel is shocked when she discovers her neighbour's decomposing body in the house next door, and appalled to think that no one, including herself, noticed her absence. Back at work she sets out to investigate, despite her police officer colleagues lack of interest, and finds data showing that such cases are frighteningly common in her own home town. A chilling thriller and a hymn to all the lonely people, whose  individual voices haunt the pages, Elizabeth Haynes new novel is a deeply disturbing and powerful thriller that preys on our darkest fears...

I seem to be reading a lot of 'firsts' at the moment, and this is another as I have never read anything by Elizabeth Haynes before. I picked this book up as an 'Amazon' recommendation, it was either free or very cheap, I can't quite remember which, but I am very glad I purchased it.

This book is exactly the kind of thriller I love. It's very very dark, but has some humour, it is told from the viewpoint of the two main characters Annabel and Colin.

Annabel has the misfortune of discovering her neighbours badly decomposed body after her cat alerts her to a foul smell in the neighbouring house. Her inquisitive mind leads her to investigate a little further as the newspapers report new 'undiscovered' deaths on a regular basis. As a Civilian crime analyst Annabel is not taken seriously at first, but as more bodies are found, the local press begin to take an interest and Sam is introduced to us.

At first Sam appears to be your stereotypical local reporter, only interested in the scoop, but as Annabel's story progresses and her paths cross with Colin's after the sudden death of her mother, we see Sam in a different light.

Colin, well Colin is the most complex character of all. We find out early on his role in the story, and it is very believable due to Hayne's brilliant writing. Although his acts are despicable you will find yourself asking, did he actually do anything wrong?

His viewpoint is that compelling.

The story is complex, with lots of twists and turns, the ending however, gives Colin just what he deserves and in this sort of story, that's all we can ask for...

As an aside, it does almost make you want to check up on your neighbours! I say almost, because although they are older than my parents, they make a right racket constantly so we definitely know that they are okay!