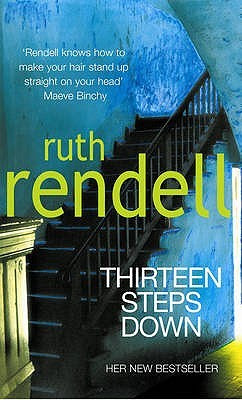 Rating: *****
Back cover blurb: Living in a decaying house in Notting Hill, Mix Cellini is obsessed with 10 Rillington Place, where the notorious John Christie committed a series of foul murders.

He is also infatuated with a beautiful model who lives nearby - a woman who would not look at him twice.

Mix's landlady is equally reclusive - living her life through her library books.

Both landlady and lodger inhabit weird worlds of their own. But when reality intrudes into Mix's life, a long pent-up violence explodes.


Firstly, I must confess to not being a huge Ruth Rendell fan.

I have read a couple of her other books and not been overly impressed, but I was drawn to this one after watching the ITV 2 part mini-series based on the book.

As is normally the case with these things, the book is infinitely better, although I thought the TV adaptation chose brilliant actors to portray the main characters of Mix Cellini and Gwendolen Chaucer.
13 Steps down, is a creepy book, full of superstition. The title referring to Mix's superstition/obsession with the number 13.

The two main characters are very self absorbed, delusional and both have major obsessions. Mix's being serial killer John Reginald Halliday Christie and supermodel Nerissa Nash. Gwendolen's being a long lost 'love', a Doctor who was treating her late mother's illness. Both characters believe that the love interests feel the same way, evidently this is not the case with either.


Mix's obsession with Christie inevitably leads to his downfall, this is not so much a 'whodunit', but a 'will he get caught'? Mix's demise is surprisingly engaging, and although he is a thoroughly unlikeable character you can't help but feel a little sorry for him and his delusional world.