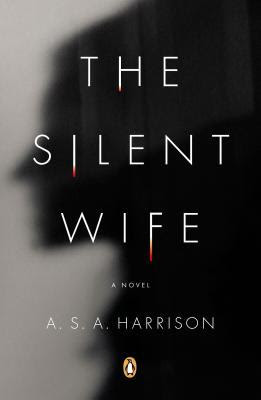 The Silent Wife by A.S.A. Harrison
Publisher: Headline
Release Date: 25 June 2013
Rating: ****
The back cover blurb: Having nothing left to lose changes everything. Todd and Jodi have been together for more than twenty years. They are both aware their world is in crisis, though neither is willing to admit it.

Todd is living a dual existence, while Jodi is living in denial. But she also likes to settle scores. When it becomes clear that their affluent Chicago lifestyle could disintegrate at any moment, Jodi knows everything is at stake. It's only know she will discover just how much she's truly capable of...

Shocking and compelling in equal measure THE SILENT WIFE is a chilling portrayal of two people in turmoil and the lengths they will go to in order to protect themselves.

I had read a lot about this book before I even knew what it was about. I follow a few publishers (in the unrealistic hope that they might take pity on me and send me some free books ;)) on Twitter, and there has been a load of hype about it for ages now. Usually I wouldn't give in to the hype, but when I actually did a little research I thought it might be the kind of book that I would actually quite enjoy.

The novel centres around Todd Gilbert and Jodi Brett, a couple who have been together for almost thirty years yet never married. This is Jodi's decision, believing that their years together have been commitment enough. Perhaps they have been, until now.

We learn fairly early on that Todd is a serial philanderer (of the worst kind) 'he likes to take advantage of the luxury goods and services the city has to offer'. This sentence is at the end of the 2nd chapter, the first about Todd, and we have already learnt that he has a young mistress, his friend's daughter. By this time I had already made up my mind about him - total creep.

Jodi on the other hand is a bit of a doormat, 'she likes things orderly and predictable', she has Todd's dinner on the table every night no matter what time he appears, and she seems to go out of her way to be accommodating to his demanding behaviour (where most of us would tell him to get stuffed).

By mid-way through the novel I didn't particularly like either of the main characters, I felt their actions don't deserve any sympathy, yet in a perverse way, by the end of the book I kind of felt sorry for both of them for different reasons.

I don't really want to elaborate much more on that point as it would give some of the plot away which I'm reluctant to do. One of the great things about the novel is that I didn't have a clue what was going to happen next. To be frank neither of the major characters seem to know what is happening to themselves most of the time, they both seem at times incapable of making any life decisions and it becomes easier to see how they find themselves in the situation that they do.

I wasn't sure about the ending, which is why I only gave 4 stars rather than 5. To me it seemed as if there was room to elaborate, but a sequel is impossible unfortunately as the writer has now passed away. This saddens me, as I think for a début novel this was a belter, and I would love to have read more by them.

Sadly that will never be.

I've read a few (okay quite a lot) of reviews comparing this novel to 'Gone Girl' by Gillian Flynn, I haven't read it yet, although it is on my list of books for this year, but I'm not sure that books should be compared just because they are in the same genre. I think this novel stands out on it's own as a gripping psychological thriller, and was a book that I simply could not put down.