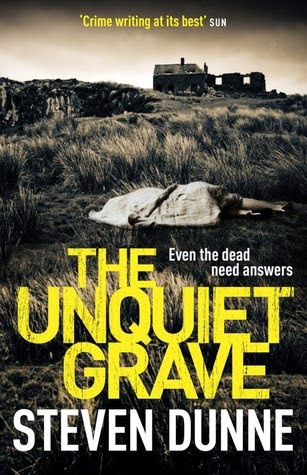 Back Cover Blurb:  The past can't stay hidden for ever ...

The Cold Case Unit of Derby Constabulary feels like a morgue to DI Damen Brook. However, in disgrace and recently back from suspension, his boss thinks it's the safest place for him.

But soon Brook uncovers a pattern in a series of murders that date back to 1963. Baffled that a killer could stay undected for so long, Brook delves deep into the past of both suspects and colleagues unsure where the hunt will lead him. What he does know for sure is that a significant date is approaching fast and  the killer may be about to strike again ...


Steven Dunne is a new discovery for me in the world of Crime fiction. I was lucky to be sent a signed copy of 'The Unquiet Grave' from Headline Publishing via their Crime Files Twitter page. I have since learnt that DI Damen Brook, the main character in this novel, is also in Dunne's previous works. This is a stand alone story, and it works, but personally, I liked Brook's character so much, that I would liked to have read the others first to get a bit more of an in-depth look at him.

The Unquiet Grave sees Brook back at the station and straight on to the 'Cold Cases' after a recent suspension. Whilst he is not thrilled at the prospect, in my opinion Brook seems like a decent man and is determined to do a good job. He finds himself drawn into several old murder enquiries which all seem to be inexplicably linked with each other. He has a hunch that they may also be related to a recent missing person's investigation which he has not been allowed to work on.

I was convinced from the start, but Brook's colleagues take a little more persuasion. As well they might, as many of the facts seem implausible but Brook seems to have a brilliant mind one colleague in particular, Noble, sticks by him, although I'm not sure he always believes Brook 100%!

I don't want to give too much of the plot away, but Dunne is a brilliant writer, keeping you engaged throughout with little twists and turns in the plot. I thought I had guessed who 'dunnit' part way through, but I was very pleasantly surprised (and kept on my toes) throughout the last few chapters.

Overall I thoroughly enjoyed this crime novel, and would recommend it to anyone who is a fan on the genre. In fact I'd recommend it even if you're not...

You can buy The Unquiet Grave from Amazon online and all good book stores.