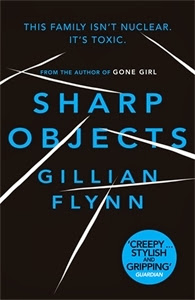 Back Cover Blurb:
When Two little girls are abducted and killed in Missouri, reporter Camille Preaker is sent to her home town to investigate. Camille has been estranged from her neurotic mother for years. Now she finds herself installed in the family home, re-acquainting herself with her half-sister a precocious thirteen-year-old who holds a disquieting grip on the town. Working alongside the police, Camille tries to untangle the mystery of who killed these little girls and why. But there are deeper pyschological puzzles: why does Camille identify so stronger with the dead girls? And how is this connected to the death of her sister years earlier?

So I finally got around to reading Flynn's debut, four months after I read 'Gone Girl'. I almost wish I hadn't bothered. In my opinion it's not worth the hype. In fact the only reason it earned a three star review is because I really rate the ending and I didn't see it coming, it's the only thing that saved the novel for me.

Camille Preaker is the main character in the book, and I found her quite likeable and felt a little sorry for her. It's clear that she has had a messed up childhood with the death of her sister only making things worse. When she returns to her home town to report on the recent murders she is forced to move back in to her family home. The closer she becomes to her mother the more her suspicions are aroused about her family and the place that she was bought up.

I found Sharp Objects quite a slow book. It wasn't the type of crime novel that kept me gripped, although I expected it to be after reading Flynn's other two. Sadly I found it lacking something. I'm still not exactly sure what. The characters were well written enough, I just feel that the novel wasn't paced fast enough for the type of story it was trying to tell.

I found it a little predictable in places, and it really wasn't the page turner I hoped it would be. In fact the only reason I read to the end is because I wanted to know if my hunch about the culprit was right, and it very nearly was. Almost.

You can buy 'Sharp Objects' from Amazon online and all good book shops.