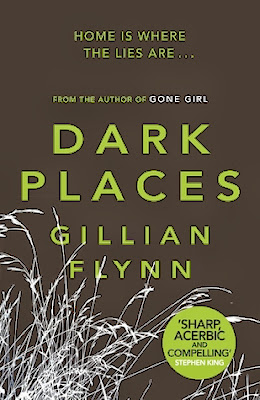 Dark Places by Gillian Flynn
Publisher: Phoenix
Release Date: 14 May 2009
Rating: **** and a half

Back Cover blurb: Libby Day was Seven Years old when her family was massacred - She and her brother Ben were the only survivors. And it was her evidence that put Ben in jail for life. It's been more than Twenty years since the 'Farmhouse Satan Sacrifices' and Libby is adrift. The charity fund set up for her is dwindling when she's offered $500 to do a guest appearance for a group of true-crime obsessives. But the group want much more than a guest appearance from Libby. They believe that Ben is innocent - and she is the key to unlocking the mystery of the farmhouse massacre. Suddenly the certainties Libby's been clinging on to don't seem so solid. Sure, Ben was a bit of a misfit. But was he really capable of multiple murders? As memories are stirred up and disturbing revelations are made, Libby realises that the only fact she can rely on is that someone wanted her and her family dead...

After reading 'Gone Girl' I heard a lot of people saying that it wasn't the author's best, despite it's popularity. So, I sought out her other two novels, 'Dark Places' and 'Sharp Objects' to deliver my own verdict. The first I read was 'Dark Places' not for any particular reason, it just happened to be the first that downloaded and I have to be honest, this is kind of more what I was expecting from 'Gone Girl'. More of a crime/horror/thriller, than the 'mystery' that Gone Girl is... in all senses of the word!

I read recently that they are making this book into a movie, which I can't wait to see. It's coming out in 2015, so I guess it's been pushed by back by the 'Gone Girl' movie, which I guess has been moved forward based on the popularity of the book. Which is a shame.

So far, I much prefer Dark Places. It reminds me a little of a few Tess Gerritsen novel's I've read, not because Flynn is trying to copy the style, but because I couldn't put the damned thing down! It's a real page turner, which is not always pleasant. As the title suggests, the book really does have some 'Dark Places', but since when was writing about Murders a pleasant subject? Hmmm.

Libby Day is the main character in the book, we meet her at Thirty-One, where we find out that she is struggling with her adult life after her family was brutally murdered, she and her brother Ben the only survivors. Who wouldn't be struggling?

We learn quickly that the young Libby testified against her brother and she remains convinced that it was him who committed the murders. That is until she accepts an offer from a (creepy) 'Kill Club' to go and speak to them about her family and her experiences that night.

Libby by this stage is desperate for money and willing to do almost anything to make some more. The club begin to question her evidence against Ben and begin to plant seeds of doubt in her own mind as to whether or not her brother really did commit the ultimate crime.

The novel flashes between the present day and the day before the murders took place, from Ben, her mother Patty, and a few other peoples points of view. I didn't find this confusing, and in fact found it helpful to try and understand just what on earth had happened that day.

I think the fact the Flynn keeps us guessing until the end, is a great tribute to her writing. Those of us who read novels such as this, are always trying to figure out the plot way before the author is willing to reveal it. I had a few ideas, but I was still a little way off the mark, and the ending actually pleased me somewhat.

I can't wait to get stuck into 'Sharp Objects' now and see how it compares.

You can buy 'Dark Places' online from Amazon and from all good book shops.