Review: Secrets of the Tides by Hannah Richell 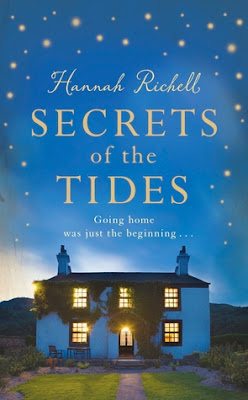 Secrets of the Tides by Hannah Richell


Back cover blurb: Every family has its secrets. Some are small, like telling a white lie or snooping through a private drawer. Others are more serious like infidelity and betrayal. And some secrets are so terrible they must be hidden away in a deep, dark place, for if they ever came to light, they would surely tear a family apart.

The Tides are a family full of secrets. Returning to Clifftops, the rambling family house high up on the Dorset coastline, youngest daughter Dora hopes for a fresh start, for herself and the new life she carries. But can long-held secrets ever really be forgiven? And even if you can forgive, can you ever really learn to love again?


After reading Hannah Richell's 2nd Novel 'The Shadow Year' earlier this year, I've been dying to get my hands on a copy of her debut novel 'Secrets of the Tides'. I was thrilled to discover the kindle version on offer recently and immediately downloaded it to my iPad, even though I should have been working at the time!

The novel is a heady mixture of past and present. The prologue is full of the mystery and tragedy of the past, whilst Chapter One sees us firmly ensconced in the present day and meeting one of the major characters of the story, Pandora 'Dora' Tide, who is revealed to be pregnant and in turmoil. Dora should be delighted, she's doing well in her career, has recently bought and moved into a property with her long term partner Dan, and really the baby should be the icing on the cake.
Dora however, is haunted by her family's tragic past, she feels a deep guilt for something that we learn was never truly her fault, but she feels that her Mother blames her for the tragedy and she knows that they must make amends if she is ever truly to move on and enjoy her own life.

Helen is Dora's Mother, and it is through her eyes that a lot of the past story is told. At first I quite liked her character, almost felt sorry for her, but as the story unfolded I began to see her in a different light. I disliked her immensely for a proportion of the book, especially at the time when the main tragedy itself is revealed, her actions are awful, but of course as we discover, it is her own guilt that drives her to being that way.
Dora's elder sister Cassandra 'Cassie' and her father 'Richard' are mainly ensconced the past, and we see little of them in the present day, but their characters are both pivotal to the story.

Although we mainly see Cassie as a stroppy teenager, I couldn't help but like her, she is of course a little selfish as most teenagers are, but the way that Helen treats both of her daughters in the aftermath after the tragedy is appalling. Cassie's desperation in the years that follow in my opinion are not only due to her own guilt, but also due to the way she is treated by Helen.

Both girls are deeply scarred by their Mother's actions, Cassie perhaps more so in the past, Dora more in the present, will they ever be able to truly move on?

Well, you'll have to give the book a read to find out. I'm certainly not going to tell you.

But I hope you enjoy reading it as much as I did. If you've read 'The Shadow Year' then it's perhaps not quite as dark, but it definitely as intriguing, and will keep you hooked. I can't wait for Hannah's next book!!

You can buy 'Secrets of the Tides' from Amazon and all good book stores.