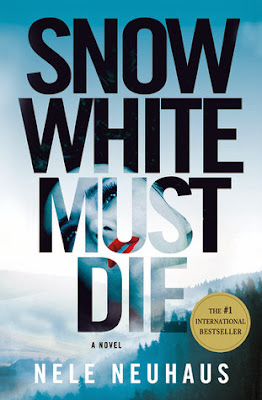 Back cover blurb: In a small village in Germany a boy is accused of murdering his beautiful girlfriend... On a September evening eleven years ago, two 17 year old girls vanished without a trace. Tobias Sartorius was convicted and imprisoned for the murder of his childhood friend Laura and his beautiful girlfriend Stefanie - otherwise known as Snow White. After serving his sentence, Tobias returns home. His presence in the little German village stirs up the events of the past. Events that the locals would prefer remain hidden. Detective Inspector Pia Kirchoff and DS Oliver Von Bodenstein are tasked with monitoring the tense atmosphere in the close knit community. As the village inhabitants close ranks it becomes apparent that the disappearance of Snow White and her friend was far more complex than imagined. Then history starts to repeat itself in a disastrous manner when another pretty girl goes missing...

I bought this novel on impulse at Birmingham airport just before I went to Gran Canaria recently. Regular readers of my blog will know that I love a good crime/thriller/suspense novel and I'd seen the title of this one on Good Reads, Amazon etc and thought I'd give it a try. I wasn't sure what to expect having not read anything by this author before, but I was pleasantly surprised.

Snow White Must Die centres around Tobias Sartorius who has just been released from a correctional facility for murdering two teenage girls 10 years ago. A teenage girl, Amelie who is new to the area becomes fascinated with Tobias and she is not the only one who questions whether or not he did indeed kill the girls whose bodies were never found. But when Amelie too disappears, the finger of suspicion is once again pointed in Tobias' direction.

The local police are called in and this is where we meet Kirchoff and Bodenstein who I am told are regular features in Neuhaus' work. Kirchoff herself begins to question Tobias' guilt, and suspects that whatever has happened to Amelie has links with the past.

You will find yourself asking is Tobias innocent? Guilty? Or indeed in any way involved?

For those who haven't read the book, I won't give anything away. But Tobias' guilt/innocence is a question you will ask yourself over and over as the plot progresses.

I found that I did have to concentrate quite hard on the story, and I'm not sure whether that's to do with the translation or just the complexity of the story and it's (many) characters, but it managed to keep me gripped enough so that I didn't lose sight of what was happening. I'd be quite interested to read some of the authors earlier books, as I have heard great things, so watch this space...

Snow White Must Die is available from Amazon and all good book stores.