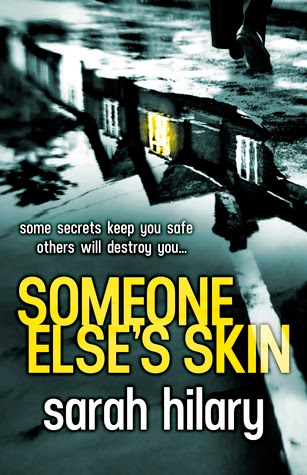 Someone Else's Skin by Sarah Hilary
Publisher: Headline
Release Date: 27 February 2014
Rating:****
Back Cover Blurb: Some secrets keep you safe, others will destroy you... Detective Inspector Marnie Rome. Dependable; fierce; brilliant at her job; a rising star in the ranks. Everyone knows how Marnie fought to come back from the murder of her parents, but very few know what is going on below the surface. Because Marnie has secrets she won't share with anyone. But then so does everyone. Certainly those in the women's shelter Marnie and Detective Sergeant Noah Jake visit on that fateful day. The day when they arrive to interview a resident, only to find one of the women's husbands, who shouldn't have been there, lying stabbed on the floor. As Marnie and Noah investigate the crime further, events begin to spiral and the violence escalates. Everyone is keeping secrets, some for survival and some, they suspect, to disguise who they really are under their skin. Now, if Marnie is going to find the truth she will have to face her own demons head on.
Because the time has come for secrets to be revealed...
Described as 'the Crime debut of the year', Someone Else's Skin is the debut novel from Sarah Hilary. It's the second crime debut novel I've read so far this year, which as a Crime fiction fan makes me very happy. Its so wonderful to read the new talent that is about!

Someone Else's Skin opens with the main protagonist Detective Inspector (DI) Marnie Rome arriving home one day to the untimely death of her parents who have been brutally murdered. Fast forward Five years and she is investigating an attempted murder at a Women's shelter with her colleague Detective Sergeant (DS) Noah Jake.

Rome and Jake had been sent to question a young girl to try and persuade her to give evidence against those who had made a horrific attack on her. They know she is unlikely to give them what they want as she is scared and vulnerable, yet very loyal to the family members that inflicted harm on her.

Their original task is soon forgotten when they find Leo Procter fighting for his life at the hands of his wife Hope. Leo is taken to Hospital separately from his wife, who is to be examined by Doctors to determine the extent of abuse she has suffered at her husband's hands. It seems to be a clear cut case of self defence.

But why would Leo bring a knife to a women's shelter? How did he get in? What exactly did he want?

These are questions that you will be asking yourself, which are largely answered by the author. Or so you think.

There is a brilliant twist at the end of Part One of Someone Else's Skin. I don't want to give anything away, but I certainly didn't see it coming, and I read a lot of crime!