Review: The Girl from Station X: My Mother's Unknown Life by Elisa Segrave 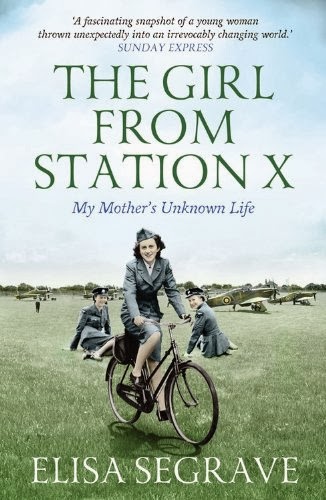 The Girl from Station X: My Mother's Unknown Life
Publisher: Aurum Press Ltd; PB Reissue edition
Release date: 15 March 2014
Rating: ***
Back cover blurb: When Elisa Segrave  uncovered a cache of wartime diaries written by her mother, she had no idea that she would be bought face to face with a character utterly different from the troubled woman who had become so reliant on her. Now, on the pages before her, Segrave encountered Anne Hamilton-Grace, a young woman who had grown up in immense privilege and luxury but who leapt at the first opportunity to join the war effort, first at Bletchley Park, then to Bomber Command and, finally, to a newly liberated Germany. In The Girl from Station X, Segrave recreates her mother's life both before and after the war. At once a vivid recreation of a dramatic era and a powerful portrait of a mother-daughter relationship, this is an original and affecting memoir about how Anne unwittingly found a way to link her life with her daughter's decades after they had given up trying to communicate.
I'd wanted to read this book for some time before it was very kindly sent to me by lovereading (in an exchange for an honest review of course). If I'm honest, it wasn't quite the book that I was expecting it to be, and I was a little disappointed.

Of course I knew it wasn't fiction, but I love reading about historical times, whether fictional or not and I was keen to discover more about Bletchey Park from someone who had actually worked there during the Second World War.

Unfortunately less than half of the book is dedicated to the 'wartime diaries' of Anne-Hamilton Grace, and it is much more focused on Elisa's troubled relationship with her Mother. We learn that the only reason she stumbles across the diaries is due to clearing the former family home as her Mother begins to suffer with dementia caused by Alcoholism (according to Elisa).

Through her diaries we follow Anne Hamilton-Grace from the age of Fifteen, through tales of a privileged upbringing, through the war, to meeting her husband and having her children, right up until her death. In the early stages of her diaries we see Anne as a privileged (perhaps spoilt) young girl with no real aspirations or ambitions. She loves to travel, and has the luxury of being able to do so due to her wealth.

Despite her status Anne is not afraid to get involved in the war effort and as WW2 breaks out signs up to the WRAF. For me these were the most interesting of Anne's diaries, during the War, and the main reason I wanted to read the book in the first place.

I do find that Elisa jumps forward and back quite a lot of the time with the diaries, which is a little annoying at times, but I suppose she is trying to get things across from her point of view even thought it is her mother's memoirs that she is writing.

The war time section of the book unfortunately seemed to disappear in a flash, and it was back to Elisa's ramblings again with little input from the Mother. I did find the book interesing, but I think perhaps a little more emphasis could have been placed on the actual diaries themselves rather than Elisa's opinions on every little thing, particularly when she has such a poor relationship with her mother.

Overall, the book was interesting, but I'm not sure I would have managed to get to the end without the wartime diaries.

The Girl from Station X: My Mother's Unknown Life is available from 15 March.
You can pre-order it now from Amazon