Review: A Heart Bent Out of Shape by Emylia Hall 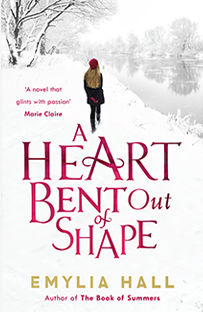 A Heart Bent Out of Shape by Emylia Hall
Publisher: Headline Review
Release date: 13 March 2014
Rating: *****
Back cover blurb: For Hadley Dunn life so far has been uneventful - no great loves, no searing losses. But that's before she decides to spend a year studying in the glittering Swiss City of Lausanne, a place that feels alive with promise. Here Hadley meets Kristina, a beautiful but elusive Danish girl, and the two quickly form the strongest of bonds. Yet one November night as the first snows of winter arrive, tragedy strikes. Hadley left reeling and guilt-stricken, begins to lean on the only person to whom she feels close, her American Literature professor Joel Wilson. But as the pair try to uncover the truth of what happened that night, their tentative friendship heads into forbidden territory. And before long a line is irrevocably crossed, everything changes, and two already complicated lives take an even more dangerous course.

Emylia Hall is a wonderful new discovery for me. Her second novel, 'A Heart Bent Out of Shape', like so many things these days was first bought to my attention on Twitter. I heard so many great things about it, that I knew I just had to read it.

Of course there's always the danger that it wouldn't be to my personal taste, or that I'd feel it didn't live up to the hype. I needn't have worried, and I'm so pleased that I went for it, because I absolutely loved it!

A Heart Bent Out of Shape from its very first pages, transports us to the picturesque beautiful Swiss City of Lausanne. Like our protagonist Hadley, I had never heard of Lausanne before picking up this novel, but Hall's wonderful descriptions have made me want to visit and experience some of the magic for myself.

I loved Hadley from the moment that I was introduced to her, and that feeling didn't fade throughout the novel as it sometimes can. She is young yes, perhaps a little naive, but she is determined to make the most of the opportunity that she has been given. I think this is most evident in her friendship with Kristina, as I get the impression that Kristina is not the kind of girl that Hadley would ever have been friends with in the UK. But Hadley desperately needed someone like Kristina to help bring her out of her shell.

Without Kristina's influence Hadley would not have met the wonderful Hugo, a retired Crime author who spends his days in one of Lausanne's most luxurious hotels. I doubt Hadley would ever have set foot in the place without Kristina!!

But Hadley does have one thing that Kristina didn't influence, and that is her friendship with her American Literature lecturer, Joel Wilson, for Hadley met Joel the night before Kristina arrived. And although then she didn't know who he was, I think I sensed that he was someone who would feature heavily in the story that followed.

Sadly that story becomes tainted with a tragic event that will impact Hadley's life forever, as well as those around her. I don't want to give any more away, instead I urge you to pick up a copy and allow yourself to be transported into a beautiful Swiss landscape that you won't want to return from.

A Heart Bent Out of Shape is available from 13 March 2014.
You can pre order it now from Emylia's website.