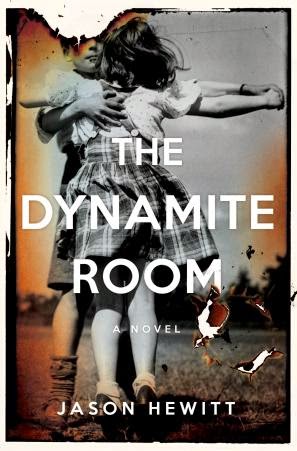 The Dynamite Room by Jason Hewitt
Publisher: Simon and Schuster UK
Release date: 27 March 2014
Rating: *** and a half
Back cover blurb: July 1940. 11 year-old Lydia walks through a Suffolk village on a baking hot day. She is wearing a gas mask. The shops and houses are empty, windows boarded up and sandbags green with mildew. She strikes off down a country lane to a large Edwardian house – the house she grew up in. But Lydia finds it empty too, the windows covered in black-out blinds. Her family are gone. Late that night he comes, a soldier, gun in hand and heralding a full-blown German invasion. There are, he explains to her, certain rules she must now abide by. He won’t hurt Lydia, but she cannot leave the house. Is he telling the truth? What is he looking for? Why is he so familiar? And how does he already know Lydia’s name?

The Dynamite Room is the debut novel from playwright and actor Jason Hewitt. A claustrophobic and disturbing account of World War II featuring a young evacuee and a lone German soldier.

We meet Lydia as she flees from her evacuation 'home' in Wales, back to Sussex to find her family. Instead she finds her the village and her home deserted, apart from Heiden a German Soldier wielding a gun at her. Lydia is taken hostage in her former family home by the soldier who claims that he will not hurt her if she does as she is asked.

Lydia is a sweet young girl, if at times a little naive. Against all the odds she begins to build to trust and build a friendship with Heiden, and as she opens up to him about her family, little by little he begins to reveal his story to her.

In a novel such as this, I would generally expect to feel some unease towards a character such as Heiden, but so brilliant is Hewitt's writing that I actually found at times that I was feeling sorry for him. This novel carries a clear message that even in war we are all human beings with feelings.

Heiden wants to do the right thing and let Lydia go, but he thinks he is in too deep to claw his way back out of the mess he has found himself in.

At times the Dynamite Room is a little confusing as it jumps between different back stories and points of view, but the story is so compelling that it is worth persevering with.

The Dynamite Room is available from Amazon online and all good book shops.