Review: The Lie by Helen Dunmore 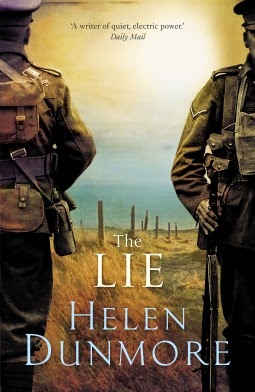 The Lie by Helen Dunmore
Publisher: Hutchinson
Release date: 16 January 2014
Rating: *** and a half stars
Back cover blurb: Cornwall, 1920, early spring. A young man stands on a headland, looking out to sea. He is back from the war, homeless and without family. Behind him lie the mud, barbed-wire entanglements and terror of the trenches. Behind him is also the most intense relationship of his life, forged in a crucible of shared suffering. Daniel has survived, but the horror and passion of the past seem more real than the quiet fields around him. He is about to step into the unknown. But will he ever be able to escape the terrible, unforeseen consequences of a lie? Set during and just after the First World War, The Lie is an enthralling, heart-wrenching novel of love, memory and devastating loss by one of the UK’s most acclaimed storytellers.


The Lie is a novel that I had read an awful lot about, and I was looking forward to ticking it off my list of books that I 'must' read this year. I must confess to not having read anything by the author before, which seems terrible, as she has an extensive back catalogue of books that really should appeal to me!

I digress.. The Lie is set in the aftermath of World War I, with flashbacks to before and during the Great War. We meet our protagonist Daniel as he recieves his nightly visit from his former Best friend Frederick, whom appears as a ghost. Frederick and Daniel had very different upbringings, but remained firm friends into the war. Their backgrounds apparent as Daniel joins the ranks, and Frederick enters the forces as an officer. Tragically Frederick loses his life in battle much to Daniels despair. Dunmore's account of the trenches and warfare are gripping, realistic, and do not shy away from the graphic detail of the horror of War.

Daniel mental struggle does not dissipate during daylight hours, for the dilapidated buildings that he inhabits belong to an elderly member of the community, Mary Pascoe who no one can remember seeing for an awfully long time. Daniel has merely carried out Mary's dying wishes, but in doing so he finds he has to lie to those around him. This does not concern him overly, until he is reacquainted with Fredericks sister, the war widowed Felicia.

Both damaged by War, slowly Felicia and Daniel become close again, and as he begins to confide in her, Daniel realises that he must tell the truth before he loses everything.

Personally I found this novel fairly slow paced aside from the last few chapters. I found myself wanting something more to happen between Daniel and Felicia, and if I'm honest I wasn't sure about the ending of the novel, and found it a little predictable. For me it was the difference between a three and a half and a four star rating. Overall it was an enjoyable read, and if you do give it a go, let me know what you think.

The Lie is available from Amazon online and all good book shops.