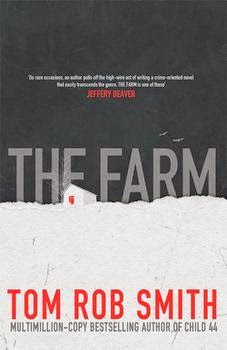 'If you refuse to believe me, I will no longer consider you my son ...'

The Farm has been on my 'to read' list for a good while now, so whilst I was at the airport recently waiting for my flight to Canada I couldn't stop myself buying it! And I'm so glad I did.
The Farm is an addictive novel that I found very difficult to put down. Cleverly written with lots of suspense and plot twists - where you would least expect them.
Daniel, our protagonist is on his way home from the supermarket when he receives the phone call from his father Chris that changes everything. Chris's wife Tilde (Daniels mother) is seriously ill and has been admitted to a secure psychiatric unit in Sweden. Guilty at not going to visit his retired parents sooner, Daniel books himself on the first flight he can.

Whilst waiting for his departing flight to be called Daniel receives a call from Tilde asking him not to believe anything that his Father has told him, for it is all lies. Tilde has been released from the secure psychiatric unit and is on her way to see Daniel.
Daniel and Tilde return to the flat where Daniel has a secret of his own. As Tilde begins to recount her strange tale of abduction, abuse, conspiracy and murder, Chris repeatedly calls his son, apparently concerned about his wife's welfare. With both parents desperately trying to make their side of the story heard Daniel finds himself having to make a monumental decision.

Who to believe?
And as the story develops, you will be asking yourself that exact question, just who do you believe, and who do you trust?

The Farm is available from Amazon online and all good book shops.