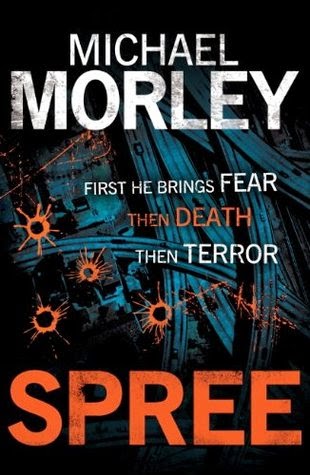 Back cover blurb: A madman is on the rampage in the Los Angeles streets. The City of Angels has become The City of Fear. And everyone from the Oval Office down wants a quick result. The heat is on Jake Mottram, head of the FBI's new Spree Killer Unit, and psychological profiler Angie Holmes to find the madman responsible. Until now, they've been great together. Both at work and in bed. But a killer is about to come between them, in ways that could cost them far more than their careers. Will they survive the spree about to come?


I'm going to make a bold statement here - Spree is one of my favourite reads so far this year!

Spree may just be the perfect crime novel. Packed full of danger, intrigue and suspense, with a little romantic intimacy thrown in for good measure, I couldn't put Spree down.

Spree opens with psychological profiler Angie Holmes receiving some news that will change the relationship between her and her partner, head of the FBI's Spree Killer Unit, Jake Mottram. Jake unhelpfully has been called to a Spree killing, and has been tasked with capturing the suspect, dead or alive.

The incident ends messily, but in Jake's favour and he is hailed a hero. But Jake barely has time to be congratulated before another Spree killer is on the loose.

'Spree' is the term used to describe a Spree killer -'someone who commits two or more homicides without a cooling off period between killings', whereas a (more traditional) serial killer can go days, weeks or even years without killing. The fact that we do not meet 'Shooter' our Spree immediately, for me helps to build the tension.

Angie meanwhile is struggling to come to terms with her news, whilst hunting for a dangerous serial rapist who she fears may be about to kill. Both Angie and Jake are determined in their fight to bring the darkest criminals to justice, and I admired that in both of them.

But can a couple who are willing to put themselves in the danger for the sake of their jobs survive against the odds? Well I really don't want to give any more away, so you'll have to read Spree to find out!
Spree is now available from Amazon online and all good book shops.

Thank you to the publishers who sent me an advanced proof copy of this novel via Bookbridgr in return for an honest review.