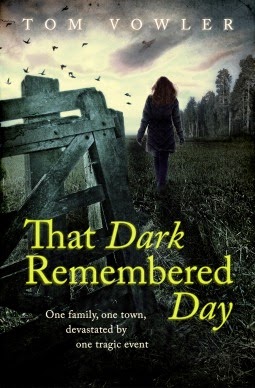 That Dark Remembered Day by Tom Vowler
Publisher: Headline
Release date: 13 March 2014
Rating: ****
Back cover blurb: One family, one town, devastated by one tragic event. Can you ever know what those closest to you are really capable of? When Stephen gets a phone call to say his mother isn't well, he knows he must go to her straight away. But he dreads going back there. He has never been able to understand why his mother chose to stay in the town he grew up in, after everything that happened. One day's tragic events years before had left no one living there untouched. Stephen's own dark memories are still poisoning his life, as well as his marriage. Perhaps now is the time to go back and confront the place and the people of his shattered childhood. But will he ever be able to understand the crime that punctured their lives so brutally? How can a community move on from such a terrible legacy?


That Dark Remembered Day is the first novel that I've read by author Tom Vowler. Now that I have, I've added his previous novels to my ever growing pile of books to be read by new authors (new to me anyway..)

That Dark Remembered Day is the story of one family who's lives were turned upside down on one day in 1983.

We meet our main protagonist Stephen in 2012, currently suspended from work due to an uncharacteristic outburst. He is spending increasing amounts of time in the pub, or in bed nursing off a hangover and his wife is becoming increasingly worried about him.

He knows he needs to sort himself out, he just isn't sure exactly what he needs to do to fix the mess that he has found himself in. Until one day, out of the blue he receives a phone call informing him that his Mother is unwell and he should come 'home' to be with her.

Stephen is forced to return to his home town, the area he has been avoiding since he was a teenager, since the day that his family's life was torn apart by the events of that one day that still haunt him years later. To the extent that he may be facing the sack as an indirect consequence.

Stephen arrives to find that little has changed in the town where he grew up including the local residents reluctance to talk about that one day. Stephen struggling with his own life, wants to remember, as if it can help him come to terms with what happened.

Stephen and his family's story unfolds through a series of flashbacks combined with present day events. Told not only from Stephen's point of view, but also that of his Mother and Father. That Dark Remembered Day deals with some difficult subjects very sensitively and is a must read for 2014.

That Dark Remembered Day is available from Amazon online and all good book shops.