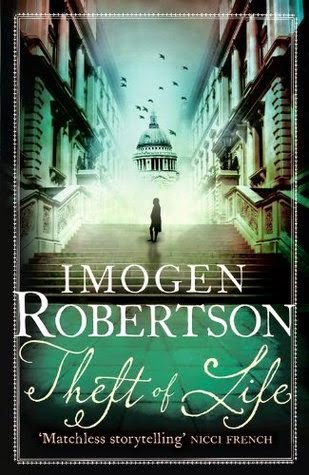 Theft of Life by Imogen Robertson
Publisher: Headline Review
Release date: 22 May 2014
Rating: ***
Back cover blurb: London, 1785. When the body of a West Indies planter is found staked out in the grounds of St Paul's Cathedral, suspicion falls at once on a runaway slave. But the answer is not that simple. The planter's death brings tragedy for Francis Glass, a freed slave now working as a bookseller, and a painful reminder of the past for William Geddings, senior footman in the household of unconventional widow Harriet Westerman. Harriet is reluctant to confront the powerful world of the slave trade, but she and her friend, reclusive anatomist Gabriel Crowther, must face its shameful truths - and the fact that much of Britain's wealth is built on wilful destruction of human life. The secrets of London's slave owners reveal a network of alliances across the capital and while some people will risk everything to preserve their reputation, some acts can never be forgiven.

Theft of Life is the second work of historical fiction I've read this year that has featured slavery, but both reads have been very different.

I've never read anything by the author previously, and unfortunately I didn't enjoy the novel as much as I thought I would, I found the characters a little too much. There were too many of them, and they were not all that well defined.

If there had been a few of the less essential characters more clearly defined in the novel then I think I would have enjoyed it more.

The novel begins with William Geddings; Senior footman of society widow Harriet Westerman stumbling across the staked out body of a West Indies slave trader.

Usually, this kind of opening would have me hooked on a novel, but that wasn't the case here.

The plot that follows is interesting enough, with the reader being taken on a complex journey to figure out exactly who was behind the horrific crime, it just wasn't gripping enough for me.

The novel is part of a series by Robertson, the fifth to feature Gabriel Crowther and Harriet Westerman and I do wonder if I might have enjoyed it more if I had read any of the previous novels. It might have helped define those characters in my head, and made it a slightly easier read.

That said, Robertson handles the difficult subject matter sensitively and overall the novel was an enjoyable read. If you're a fan of historical fiction, or have read any of Robertson's previous novels, then you should definitely give it a go.

Theft of Life is available to buy online now and from all good book shops.