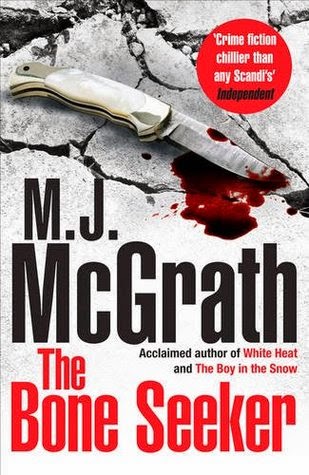 The Bone Seeker by M.J. McGrath
Publisher: Mantle
Release date: 5 June 2014
Rating: *** and a half
Back cover blurb: Summer in the High Arctic. When young Inuit Martha Salliaq goes missing from her settlement, her teacher, ex Polar Bear Hunter Edie Kiglatuk enlists her police friend Derek Palliser to help search for the girl. But once a body is discovered floating in a polluted lake on the site of a decommissioned Radar Station, Edie’s worst fears are realised. As the investigation into Martha’s murder begins, the Inuit community – and Martha’s devastated family – are convinced the culprits lie within the encampment of soldiers stationed nearby. Before long Sergeant Palliser finds evidence linking two of the men with the dead girl. But Edie and local lawyer Sonia Gutierrez remain unconvinced. Why are the military quite so willing to cooperate with the investigation? Contd..


The Bone Seeker is the first novel that I have read by M.J. McGrath, and whilst in parts it was gripping, it required an awful lot of concentration to understand what was going on.

That said, I usually don't mind novels that require concentration, as it usually means I'm using my brain, and the writing is excellent.

However in this case, whilst the writing was indeed of excellent quality, I'm just not sure this particular novel was for me.

From the back cover blurb I guess I was expecting something more than I actually got. Whilst I appreciate that statement is probably a little frustrating, I don't want to spoil the plot for those that actually wish to read the novel. I'm pretty sure there will be loads of readers who will love this, sadly it just wasn't for me.

The Bone Seeker is set in the Canadian artic and starts off simply enough, with an innocent exchange of words between Edie Kiglatuk a Summer school teacher and one her pupils, Martha Salliaq. It is only when Martha fails to turn up to subsequent lessons that Edie begins to question the exchange.

When Martha's body is found in a nearby lake, Edie enlists the help of Sergeant Derek Palliser to try and solve the crime. Several prime suspects are quickly identified with soldiers from a nearby camp among them. At first the suspects are co-operative, but as time goes on, you begin to think that maybe not everything it as it seems, you always feel that there is more to the story than Martha's death, but what exactly is not revealed quickly.

If you get through the gory descriptions and profuse swearing, then you will be rewarded with the truth. The Bone Seeker may not have been to my personal taste, but it has had favourable reviews elsewhere, so why not give it a try?

The Bone Seeker is available to buy now from Amazon online and all good book shops.