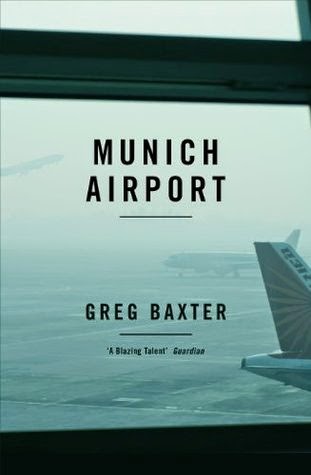 Munich Airport by Greg Baxter
Publisher: Penguin
Release date: 03 July 2014
Rating: *** and a half
Back cover blurb: An American expat in London, about to enter a meeting, takes a phone call. The caller is a German policewoman. The news she has to convey is almost incomprehensible: the man's sister, Miriam, has been found dead in her Berlin flat, of starvation. Three weeks later, the man, his elderly father, and an American consular official find themselves in an almost unbearably strange place: a fogbound Munich Airport, where Miriam's coffin is to be loaded onto a commercial jet. Greg Baxter's extraordinary novel tells the story of these three people over those three weeks of waiting for Miriam's body to be released, sifting through her possessions, and trying to work out what could have led her to her awful death. Munich Airport is a gripping, daring and mesmeric read from one of the most gifted young novelists currently at work.

Munich Airport tells the tale of a disjointed family, living separate lives across many miles. Father and Son are bought together by the untimely death of daughter and sister, Miriam, who has died of starvation.

Munich Airport is told from Miriam's brothers point of view, from the moment that he took the phone call informing of her death right through to the delay at Munich Airport where Father and Son are waiting to bring Miriam's body back to the USA.

Whilst the characters pasts are touched upon, I didn't feel that Miriam's story was told as fully as it could have been, and for me, the novel quite a few unanswered questions.

Nevertheless it was an enjoyable read, and I would recommend it to others.

Munich Airport is ultimately an imaginative and moving novel that will make you question the complexity of the modern family, and if you could or should be doing more within your own.

Munich Airport is available to buy now from Amazon online and all good book shops.