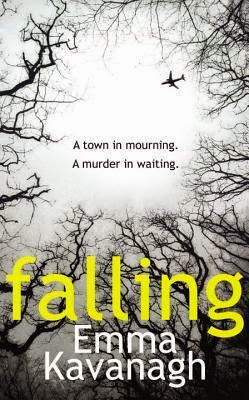 I pride myself on keeping as up to date on the latest releases as possible, but Falling, Emma Kavanagh's debut novel somehow passed me by. But as soon as I saw it in a magazine I knew I had to read it.

Not only did it sound like a great crime novel, but it also involved a plane crash... You'll have to bear with me a minute on this one.

So, I'm going to confess something that might make me sound a bit weird/bit of a geek etc... I love books, TV programmes, films that involve Aeroplanes, and particularly those that involve crashes (Final Destination, Air Crash Investigation etc). I find it all so fascinating, but I have no idea why!

Falling opens (kind of inevitably) with the plane crash. Here we meet Cecelia, Air Hostess, Mother and Wife. Cecelia however doesn't want to be any of these things, and walks out on her family the very morning of the plane crash, the flight is to her last having already handed in her notice.

Tom her husband is a Police officer on duty when he hears the news about the plane crash and fears that the worst has happened to the mother of his child.

Freya's father is on the plane, her Mother and Brother both devastated by the news, but Freya can't bring herself to be upset for the Father she feels she barely knew. When the press come knocking on the door, instead of turning them away in disgust, Freya is intrigued by the allegations that they make.

Links between these characters are there from the very beginning of the novel, but it's only as the story grows that they become stronger.

Despite Falling's satisfying conclusion I do find myself wondering about the characters and what the future holds for them. I think that is due to the subject matter though, and not just how you deal with the initial aftermath of a plane crash/ horrific crime, but also how you deal with it in the years to come. A future sequel maybe? I think I just liked the characters too much to let them go!


Falling is available to buy from Amazon online and all good book shops.