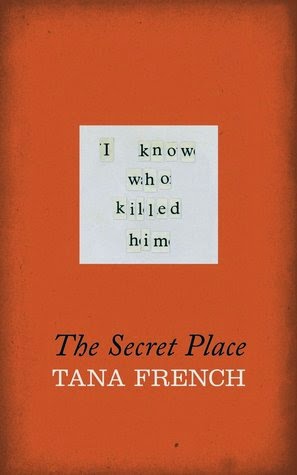 The Secret Place by Tana French
Publisher: Hodder & Stoughton
Release date: 28 August 2014
Rating: *****
Back cover blurb: ‘I know who killed him.’
Could these few words, posted on a notice board in an exclusive girls’ boarding school, be Detective Stephen Moran’s passport to the Murder Squad? Moran is about to be plunged into the single most intense and nerve-shredding day of his life, investigating the story of a boy whose murder has been unsolved for a year, and a group of girls on the verge of womanhood, who all seem to have something to hide.

Well, I finally know who killed him!

Let's just say it definitely wasn't who I was expecting, but you will have to read for yourself to find out.

The Secret Place at first glance, might seem like a bit of an epic read at 500 odd pages, but it is worth the effort because every single one of those pages is beautifully written.

Holly Mackey, the infamous Detective Mackey's daughter is already known to Detective Stephen Moran, when she turns up at his office with a crucial piece of evidence for a case that remains an unsolved mystery.

Chris was a popular boy, didn't do drugs, didn't drink (well no more than the usual amount that teenagers do anyway) so who killed him and why?!

It's a question that Detective Antionette Conway has been asking for the past year. She has interviewed Chris Harpers' friends, family and ex-girlfriend(s) but has gotten no where. She is certain that Private girl's school St Kilda's holds the answers and Holly Mackey herself is a border there.

When Detective Moran turns up in Conway's team with the evidence she is determined to re-open the case, with or without Moran. Moran convinces her that they should work together, and their Detective partnership is born, and my is it a good one!

The way they bounce off each other (good and bad) is ingenious. I digress slightly...

Moran and Coran are on their way to St Kilda's before you can blink, convinced that The Secret Place holds... well, the secret I suppose!

The Secret Place is the key to the investigation, but it could refer to so much more; a hiding place for a mobile phone, a hang-out for teenage girls etc...

I'm not going to give any more away because I really want everyone to read this book for themselves and find out exactly who killed him.

The Secret Place is available to buy from TODAY online and from all good book shops.