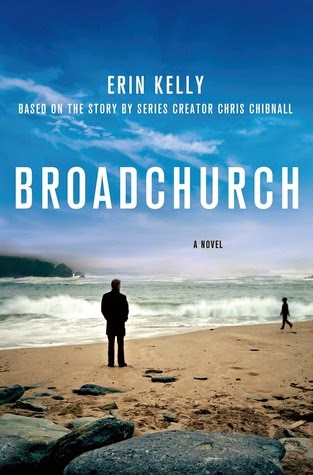 Broadchurch A Novel by Erin Kelly
Publisher: Minatour Books
Release date: 16 September 2014
Rating: *****
Back cover blurb: It's a hot July morning in the Dorset town of Broadchurch when Beth Latimer realises that her eleven-year-old son, Danny, is missing. As Beth searches desperately for her boy, her best friend, local police officer DS Ellie Miller, arrives at work to find that the promotion she was promised has been given to disreputable Scottish outsider DI Alec Hardy. When Danny's body is found on the beach Ellie must put her feelings aside as she works with DI Hardy to solve the mystery of Danny's death. As the case becomes a murder investigation the news hits the national press, jolting sleepy Broadchurch into the national spotlight. As the town's secrets begin to unravel, members of this tight-knit community begin to consider those in their midst. Right now it's impossible to know who to trust...

I was a massive fan of the Broadchurch series on ITV (still am). I even warmed to David Tennant (let's just say I'm not exactly a fan!) so I wasn't too sure what to expect when I requested Erin Kelly's 'Broadchurch a novel', but I knew I was intrigued.

I faced the first page with a little trepidation, yet I needn't have worried because I was hooked from the first sentence.

In many ways it is better than the TV series because you can really get into the characters heads.

The novel opens with a lone figure on a cliff top, in exactly the same way that the TV series did. Closely followed by the discovery of a young boys body on the beach. The body is that of local boy, Danny Latimer. Son of Beth and Mark Latimer and brother of Chloe.

The local community is stunned, not least when they discover that his death was no accident. Detective Sergeant Ellie Miller is Beth Latimer's best friend, but she must put that to the back of her mind as she begins to investigate Danny's death, with the help of Broadchurch Police Force newcomer Detective Inspector Alec Hardy.

Ellie and Alec's fraught relationship for me, played out even better in the novel than it did on screen. Ellie should hate Alec, after all she returned from a wonderful holiday in Florida certain of promotion, to find out that he'd been given her job. Ellie accepts the situation with grace, but is not above a bit of name calling behind Alec's back (mostly in her own head). Despite their differences though they work well together.

Alec is strong where Ellie is weak, for although she has been trained for situations like this, as have her colleagues, Broadchurch is a peaceful seaside village that has probably never even needed to use a riot van on a Saturday night.

Ellie is also too trusting of those around her, and Alec helps her to see that you can't really know or trust anyone, and that everyone is a suspect until they have been eliminated. It is this approach that helps them find the killer, just as they are about to give up all hope.

Any fans of the TV show who have doubts about reading this novel really shouldn't. Even if you know who killed Danny Latimer, you will still feel the shock of the Broadchurch community when the killer is revealed and it will stay with you long after you have read the final page.


Broadchurch A Novel (UK Version) is available to buy now from Amazon online and all good book shops.