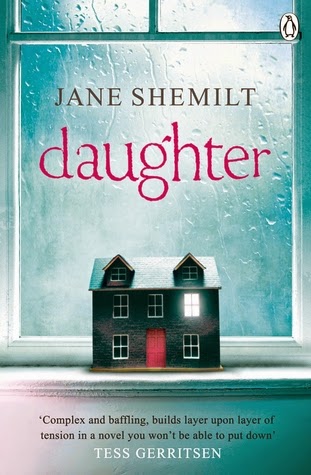 Daughter by Jane Shemilt
Publisher: Penguin UK
Release date: 28 August 2014
Rating: *****
Back cover blurb: When a teenage girl goes missing her mother discovers she doesn't know her daughter as well as she thought in Jane Shemilt's haunting debut novel, Daughter. THE NIGHT OF THE DISAPPEARANCE. She used to tell me everything. They have a picture. It'll help. But it doesn't show the way her hair shines so brightly it looks like sheets of gold. She has a tiny mole, just beneath her left eyebrow. She smells very faintly of lemons. She bites her nails. She never cries. She loves autumn, I wanted to tell them. She collects leaves, like a child does. She is just a child. FIND HER. ONE YEAR LATER. Naomi is still missing. Jenny is a mother on the brink of obsession. The Malcolm family is in pieces. Is finding the truth about Naomi the only way to put them back together? Or is the truth the thing that will finally tear them apart? Daughter by contd...
When you are still thinking about the ending of a book, days after you've finished it. You know it was a good one.

When Naomi goes missing her family is distraught.

Jen is a respectable family GP but she had noticed her daughter behaving strangely only days before her disappearance.

Jen is certain that she knows her daughter so well though that she would have known if she was going to run away or stage a disappearance for attention as the Police would have her believe..

Naomi isn't like that. She is a normal teenage girl, starring as the lead in the schools production of West Side Story, exhausted from rehearsals but happy with her life.

As the police begin their investigation into Naomi's disappearance, certain aspects of Naomi's teenage life begin to come to light and Jen begins to question whether she ever really knew her daughter at all.

As the investigation grows deeper and the mystery surrounding Naomi's disappearance continues, the family are scrutinised in a way that none of us would ever want to be.

Piece by piece the family begins to unravel and you begin to suspect that everyone had a hand in Naomi's disappearance and wonder who exactly you can trust.

Lots of the characters are unlike-able but this is part of Daughters charm. It draws you in with a ferocity unlike anything I have read before.

Daughter is an intense novel that will leave you wanting more.
Daughter is available to buy now from Amazon online and all good book shops.