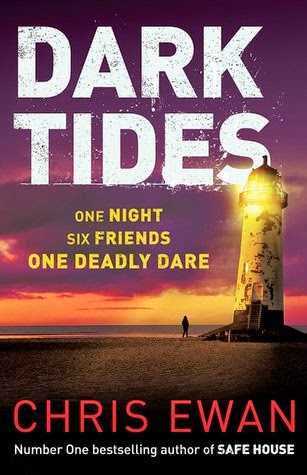 Dark Tides by Chris Ewan
Publisher: Faber and Faber
Release date: Oct 16 2014
Rating: ****
Back cover blurb: A stunning new thriller from the bestselling author of Safe House. When Claire Cooper was eight years old her mother mysteriously vanished during Hop-tu-naa, the Manx Halloween. At fourteen, Claire is still struggling to come to terms with her disappearance when she's befriended by a group of five teenagers who mark every Hop-tu-naa by performing dares.But Claire's arrival begins to alter the group's dynamic until one year a prank goes terribly wrong, changing all their futures and tearing the friends apart. Six years later, one of the friends is killed on Hop-tu-naa in an apparent accident. But Claire, now a police officer, has her doubts. Is a single footprint found near the body a deliberate taunt? As another Hop-tu-naa dawns, bringing with it another death and another footprint, Claire becomes convinced that somebody is seeking vengeance.. Contd...

So Chris Ewan was an author I'd not had the pleasure of reading up until my recent trip abroad, and I have to admit that I initially found the novel quite slow to get in to. However, by the end of the novel I was gripped. AND - I almost had the correct suspect, but not quite!

Our protagonist, Claire Cooper, could have grown up to be a disturbed individual after the disappearance of her mother when she was young, and her involvement with a group of people that from the outside, were so different from her, that they could only cause her trouble.
But we often make awkward decisions as a teenager for the sake of friendship. And for Claire getting involved with a group of teenagers who celebrate every Hop-tu-naa (Manx Halloween) with a challenging dare, the lure was too hard to resist.

Hop-tu-naa has a special significance for Claire as its the very evening that her Mother disappeared. When her new found friends get wind of this, they want to take revenge of those who they believe are truly resposible for the event.
The night is remembered for all of the wrong reasons and has consequences even years later that none of them could have foreseen.
Fast forward to the present day and Claire is a trusted member of her local community, a police officer, a truly good person, which shows in her chosen professional though you may query if she chose it out of guilt or whether she was just looking for answers regarding her mother.

It's not until Claire's friends start dying in 'accidents' (that no one can explain), one by one that the novel starts to get really interesting and from this point on I was hooked. Is someone after revenge for 'the' fateful Hop-tu-naa night of the past, or is it just a series of coincidences. Claire knows that she must find out and risks her life (and career) in doing so.
Dark Tides is available to buy from 16 October 2014.