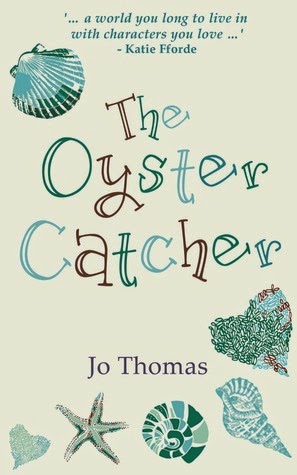 The Oyster Catcher by Jo Thomas
Publisher: Headline Review
Release date: 6 November 2014
Rating: ****
Back cover blurb: Fiona Clutterbuck thinks she’s got it all when she finally becomes Mrs Brian Goodchild, marrying weeks before her 30th birthday. But when he abandons her at the altar, she does the only thing she knows how to do, run away. Crashing the honeymoon camper van, she finds herself in the middle of nowhere on the west coast of Ireland with only the clothes she’s stood up in. So, if she’s not Mrs Brian Goodchild anymore, who is she? One thing she does know, she can’t go home. What Fi wants is to hide away, and where better? She takes a job on an oyster farm despite being terrified of water and her new boss, the wild and unpredictable Sean Thornton and his oyster broker partner Nancy Dubois. There, she battles oyster pirates, pearl queens and circling sharks before finally coming out of her shell and finding love amongst the oyster beds of Galway Bay.

The Oyster Catcher is a funny heartwarming story about finding love and friendship in the most unlikely of places.

Fiona Clutterbuck is a desperate woman, jilted at the altar in the most shocking of circumstances she flees the scene, only to cause her own chaos with her dramatic arrival in Dooleybridge.

Upon the advice of the first local she encounters (I won't spoil the plot for anyone who hasn't read the novel) Fiona seeks out Sean Thornton in the local pub. Sean is the owner of the local oyster farm, and has been looking for someone to help him out.

Against her better judgement Fiona accepts the role that Sean offers her, knowing little about Oysters, nothing about farming and harbouring a secret fear of water!

Dooleybridge itself is notoriously unwelcoming to strangers, particularly those who arrive in such a dramatic fashion and Fiona has to work hard to gain the trust and respect of those around her.

In part though I think that is what makes this such a great read. It is honest. Anyone who has ever moved anywhere new and found it difficult at first to fit in will be able to relate to Fiona and how she is feeling.

The relationship between the two main characters is also honest, and I admire the author for the way in which the story builds to a convincing climax. I read this novel in a couple of days, staying up late to finish as I couldn't wait to read what happened. With how ill I've been feeling lately, that's praise indeed!

The Oyster Catcher is available to buy now from Amazon online and all good shops.