Review: Some Luck by Jane Smiley 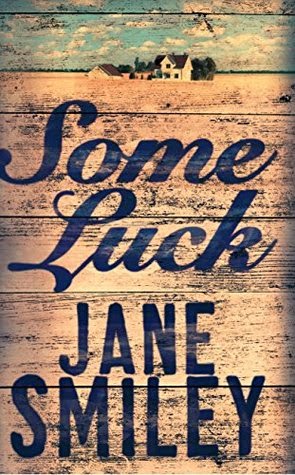 Some Luck by Jane Smiley
Publisher: Mantle (Pan Macmillan)
Release date: 06 November 2014
Rating: *****
Back cover blurb: America. 1920. After his return from the battlefields in France, Walter Langdon and his wife Rosanna begin their life together on a remote farm in Iowa. As time passes, their little family will grow: from Frank, the handsome, willful first-born, to Joe, whose love of animals and the land sustains him; from Lillian, beloved by her mother, to Henry who craves only the world of his books; and Claire, the surprise baby, who earns a special place in her father's heart. As Walter and Rosanna struggle to keep their family through good years and hard years - to years more desperate than they ever could have imagined, the world around their little farm will turn, and life for their children will be unrecognizable from what came before. Some will fall in love, some will have families of their own, some will go to war and some will not survive. All will mark history in their own way. Tender, compelling and moving from the 1920s to the 1950s, told in multiple voices as rich as the Iowan soil, Some Luck is an astonishing feat of storytelling by a prize-winning author writing at the height of her powers.

Some Luck is the first novel in Jane Smiley’s trilogy covering the lives of the Langdon family. (The second novel is already on my hot picks for 2015 having read ‘Some Luck’).

I’ve never read anything by Jane Smiley before, but having read this, she is now on my ‘list’ of favoured authors.
Some Luck is beautifully written, keeping the reader engaged through some thirty years before leaving us in suspense with the ending.

Each chapter covers a different year in the Langdon family’s life allowing us to really get to know each member of the family as they grow with the family.

My favourite character thus far is Frank. I’m not sure if it’s because we are introduced to him so early on, or whether I could just identify with him personally. But I think he’s a little bit of everything all rolled in to one.

Those first chapters where we see the family and their surroundings through his eyes as a baby are unique and something that I’ve not encountered before.
Starting in 1920, Some Luck covers some 33 years but it doesn't feel like a long novel, at least it didn't to me. It takes the reader on a wonderful journey where we see the Langdon children grow up and into their own families, through the struggles of war and the great depression, we are taken on a journey through American history without being preached to.
There is something in Some Luck for everyone, beautiful scenery and landscapes, brilliantly flawed characters and plenty of drama without being over the top.
Some Luck is a stunning novel and one I don't hesitate to recommend.

Some Luck is available to buy now from Amazon online and all good book shops.