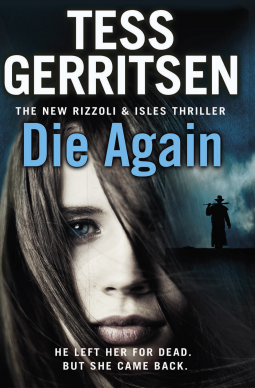 Die Again by Tess Gerritsen
Publisher: Transworld Publishers
Release date: 01 January 2015
Rating: ****
Back cover blurb:
THE VICTIMS In Boston, Detective Jane Rizzoli and Forensic Pathologist Maura Isles are investigating a bizarre murder. A man has been found gutted and hanging in his home. When the remains of another victim are found, it is clear that this murderer has been at work for years, and not just in Boston.

THE KILLER Six years ago, a group of travellers set off on an African safari. None of them are seen again – apart from one woman who stumbled out of the bush weeks later, barely alive. The only woman to have seen the killer’s face.

THE SURVIVOR Has the ‘safari killer’ resurfaced in Boston? Jane is sent to Africa to find the one link between the two cases – the only survivor - and convince her to face death once again...

Die Again is a Rizzoli and Isles novel from Tess Gerritsen with a bit of a difference (at least to those that I have read previously). It spans across the events of several years and also across two different continents, North America and Africa.

When a well known and highly regarded taxidermist, Leon Gott, is found brutually murdered, gutted and hung like a piece of meat in his home, the investigating officers believe that it's a one-off. But when a body is discovered that has been buried for years with similar markings on its skeleton, the investigation gets a whole lot more complicated.

Forced to believe that the two murders may be linked and that they may be looking for a serial killer amongst the taxidermy/zoological/hunter population, Rizzoli and Isles' investigation takes them back several years to a group of tourists that seemingly disappeared presumed dead in Southern Africa whislt on safari.

Leon Gott's estranged son was one of those tourists. Are their deaths somehow connected, or is Leon's son still alive after all this time? There are many frustrating questions to be answered, and perhaps only one person who can answer them.

Millie, was the sole 'survivor' of the tourist group, surviving days out in the bush after the others had vanished. Rizzoli and Isles think that she is the key to their investigation, but getting her to talk about what happened is going to be a different matter entirely. Millie doesn't want to 'Die Again' and who can blame her?

Die Again is available to buy now from Amazon online and all good book shops.