Review: The Flight by M.R. Hall 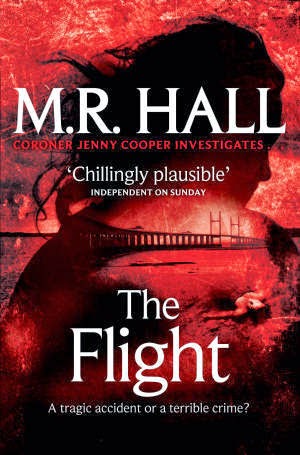 The Flight by M.R. Hall
Publisher: Mantle
Release date: 02 Febraury 2012
Rating: *****
Back cover blurb: A tragic accident or a terrible crime? When Flight 189 plunges into the Severn Estuary, Coroner Jenny Cooper finds herself handling the case of a lone sailor whose boat appears to have been sunk by the stricken plane, and drawn into the mysterious fate of a ten year-old girl, Amy Patterson, a passenger on 189, whose largely unmarked body is washed up alongside his. While a massive and highly secretive operation is launched to recover clues from the wreckage, Jenny begins to ask questions the official investigation doesn’t want answered. How could such a high tech plane – virtually impregnable against human error – fail? What linked the high powered passengers who found themselves on this ill-fated flight? And how did Amy Patterson survive the crash, only to perish hours later? Under pressure from Amy’s grieving mother, and opposed by those at the very highest levels of government, Jenny must race against time to seek the truth behind this terrible disaster, before it can happen again . .

Firstly I want to thank my cousin for recommending this book to me (albeit on a flight(!)). Secondly, why have I not heard of this author before? He lives literally on my doorstep! Thirdly, regular readers of my blog will know that I a) love books with plane crashes in and b) rarely blog about books that haven't been 'recently' published. For The Flight I make an exception. I digress...

The Flight is a crime/thriller novel from a perspective that I had not considered before, that of the coroner.

Coroner Jenny Cooper (the main protagonist of M.R. Hall's coroner series) is called to investigate the death of a sailor, whose ship wreck appears to be have been caused by the crash of a large passenger aircraft that mysteriously plunged in to the Severn Estuary. The largely unmarked body of Amy Patterson, a ten year old passenger of Flight 189 is found nearby, with her lifejacket inflated.

This leaves Jenny with a lot of unanswered questions;

Did she survive the initial crash?

Why is she so close to the sailor?

Are their deaths linked or is it just a tragic coincidence?

And how on earth did one of the world's most advanced passenger jets fall from the sky?

Of course, we know that the last question is one that can be answered with some confidence. Pilot Error. Catastrophic failure. Inclement weather. There are all causes of fatal crashes in the past, some alone, and some combined together. Some crashes remain a mystery forever, but Jenny Cooper, does not want these questions to go unanswered. She is convinced that there is a link, that no one wants her to make. There is something about the way that the authorities around her are acting, that only makes Jenny more determined.

The Flight is a novel that will have you gripped from start to finish, and with recent world events, its conclusion may leave you chilled to the bone.


The Flight is available to buy from Amazon online.