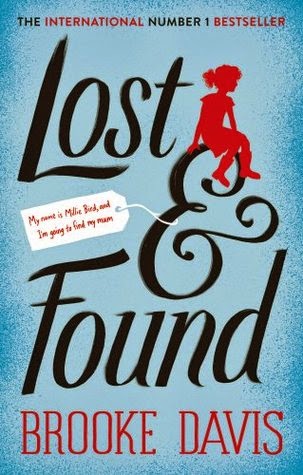 Back cover blurb: Millie Bird is a seven-year-old girl who always wears red wellington boots to match her red, curly hair. But one day, Millie’s mum leaves her alone beneath the Ginormous Women’s underwear rack in a department store, and doesn’t come back. Agatha Pantha is an eighty-two-year-old woman who hasn’t left her home since her husband died. Instead, she fills the silence by yelling at passers-by, watching loud static on TV, and maintaining a strict daily schedule. Until the day Agatha spies a little girl across the street. Karl the Touch Typist is eighty-seven years old and once typed love letters with his fingers on to his wife’s skin. He sits in a nursing home, knowing that somehow he must find a way for life to begin again. In a moment of clarity and joy, he escapes. Together, Millie, Agatha and Karl set out to find Millie’s mum. Along the way, they will discover that the young can be wise, that old age is not the same as death, and that breaking the rules once in a while might just be the key to a happy life.


Lost & Found is a novel that first came to my attention via Twitter. (So many books do these days!) and it intrigued me. So I had a little look on netgalley and thought, yes, I like the sound of that.

Millie Bird is Seven years old, a naturally inquistive child who is devastated at the loss of her father and a burden on her mother who clearly cannot cope. So much so that she abandons Millie in a department store with a promise to return soon.

Unfortunately for Millie, her mother has left with no intention of ever coming back. Millie learns to fend for herself in the department store, frequently speaking to an 'old man', Karl the touch typist. Karl, in his own way has been abandoned too. Left by his family to spend his last days in a nursing home that he has no desire to live in, he escapes to the wider world, but now has to fend for himself.

Karl and Millie strike up an unlikely friendship, until that day they are discovered by the store detective. Desperate not to be caught and sent to lives they do not wish to live, they go their seperate ways, Millie back to her abandoned home and Karl to wander the streets.

Once she is back home, Millie inadvertently captures the heart of her neighbour, an elderly lady by the name of Agatha Pantha. Both Agatha and Karl are widowed, and both of them have the same interests at heart - finding Millie's mother. They may make an unlikely trio, but together Millie, Karl and Agatha are pretty formidable...

Lost & Found is a heartwarming debut novel with some brilliantly feisty characters. I particularly loved Millie (or Just Millie as she is christened by Karl) and how she coped with losing both her Father and Mother in a short time period, and I'm sure that you will too.

Lost & Found is released on 29 January 2015. You can pre-order from Amazon online now.