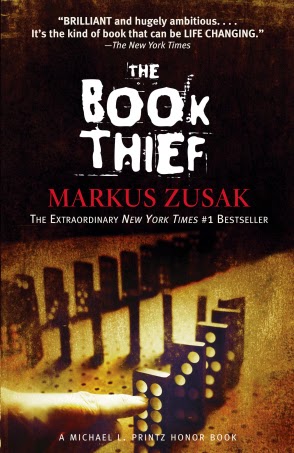 the Book Thief by Markus Zusak
Publisher: Knopf
Release date: 14 March 2006
Rating: *****
Back cover blurb:
Here is a small fact. You are going to die.
1939. Nazi Germany. The country is holding its breath. Death has never been busier. Liesel, a nine-year old girl, is living with a foster family on Himmel Street. Her parents have been taken away to a concentration camp. Liesel steals books. This is her story and the story of the inhabitants of her street when the bombs begin to fall.
Some important information;
This novel is narrated by Death. It's a small story, about;  a girl, an accordionist, some fanatical Germans, a Jewish fist fighter, and quite a lot of thievery.
Another thing you should know;
Death will visit the book thief three times.


the Book Thief is shamefully a book that has been sat on my shelf for an absolute age. It's one of those books I keep meaning to read and then get distracted by something else. I also wanted to read the novel before I saw the film, and as I'm sure it must be due out on DVD soon I thought I'd best get a move on!!
As the back cover blurb suggests the Book Thief is narrated by Death. Now Death as a narrator is nothing new in the world of fiction, but I don't think I've ever read a novel where I actually emphathised with it.
Death here almost has a conscience. Almost...

But this is Germany in World War II and there is little room for conscience as Liesel finds out in more ways that one.
Liesel Meminger is just nine years old when she is effectively orphaned (her Mother is forced to give up her two children and her brother dies on the journey to Molching) and taken to live with the Hubermann family in Molching a fictional town just outside of Munich, Germany.
Hans Hubermann is a painter and accordionist, Rosa Hubermann the local washerwoman. To Liesel at first, her new home is frightening and she often wakes in the night dreaming about her brother. As the nightmares become more frequent, Hans is the one to calm and soothe Liesel and the two begin to bond.
Slowly Liesel is taught to read by Hans who one night discovers the book she stole from her brothers graveside. Hans helps Liesel further by painting at first letters and then words increasing in difficulty on to the walls of the basement of the house.
A basement that will grow with significance as the story progresses.
Hans is a survivor of the Great war, surviving a dear friend. He has always promised to help his friends family if the need should arise, and sure enough as World War II gets underway, Hans is needed more than he ever thought he would be.
Max Vandenburg is Hans' friends son, and is in desperate need of a place to hide, for he is Jewish. Hans himself struggles to conform to the Nazi party rules and although he recognises the risk involved is more than happy to keep Max in his basement to help out his old friend.

Liesel and Max are an unlikely friendship, but they too share a love of the written word. And whilst hiding a jew in your basement, stealing books and beating up other kids in the playground are perhaps not the usual activities of a young girl- Liesel Meminger is anything but ordinary.
the Book Thief is available to buy now from Amazon online and all good book shops.