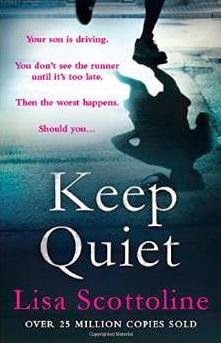 Keep Quiet by Lisa Scottoline
Publisher: Headline
Release date: 20 November 2014
Rating: ****
Back cover blurb: One decision. One family's future in ruins. When Jake Buckman decides to let Ryan, his sixteen-year-old son practice driving home along a deserted street, he has no idea of the deadly consequences. But in the darkness of night, a runner comes from nowhere and the hit is fatal. Now Jake and Ryan have two options: admit Ryan's responsibility ... or drive home as though nothing happened. What follows is not a clear-cut hit and run, but a split-second decision by a father who will do anything to protect his son. How much should a parent sacrifice for their child? And could any family survive the burden of such a terrible secret?


Keep Quiet is the first novel by Lisa Scottoline that I have had the pleasure of reading, and it certainly won't be the last.

Keep Quiet is what I believe is currently being called 'grip-lit'. Loosely defined as a book that you literally cannot put down as it has you as the reader, gripped tightly in its plot.

Keep Quiet is the story of a hit and run tragedy. Ryan Buckman, wants to pratice his driving skills, so whilst out one night, his father Jake lets him drive along a quiet stretch of road where he thinks that no-one will see them.

Ryan is driving well, he is not some stupid kid, and after all, his father is in the car alongside him, but then tragedy strikes, and Ryan realises that he has hit something or somebody. Jake is quick to act, to take responsibility for the incident, and makes a split second decision that could affect their lives forever.

Ryan is consumed by guilt, but struggles on to function through his daily life, going to school, basketball practice etc. Whilst his father, Jake struggles to keep a hold on the business he has built up for himself.

At first, the novel seems like a straightforward tale of morality. But as you delve deeper into the novel, you realise that everything is not as it seems, and the Buckman's aren't the only ones keeping some dark secrets hidden.

Keep Quiet is a must read for any crime/mystery/thriller fans, and will have you gripped until the end.

Keep Quiet is available to buy now from Amazon online and all good book shops.

Thank you to bookbridgr who sent me a copy of this novel in exchange for an honest review.