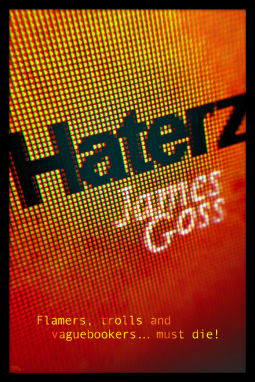 Haterz by James Goss
Publisher: Rebellion
Release date: 12 March 2015
Rating: ****
Back cover blurb: A blackly comic crime novel about a one-man crusade to rid the internet of haters, flamers, trolls and vaguebookers... even if he has to kill to do it. Is there someone online who really annoys you? Who is always bragging, posting too many pictures and just doesn't get jokes? Look at your Twitter feed, don’t you get cross at the endless rage, bigotry and the pleading for celebrity retweets? Meet Dave. He decides that unfollowing someone just isn't enough. He's determined to make the internet a nicer place, and he won't stop at murder in order to achieve it. When he kills his best friend's girlfriend, he isn't planning on changing the world. She was just really annoying on Facebook. But soon Dave realises he’s being manipulated. A conspiracy are using him to gain control of something dark forming at the heart of the world wide web...

Haterz is a crime novel for anyone, anywhere who has ever used the internet and found someone just a little bit irritating.

Dave is on a mission to remove those people from society, starting with his best friends girlfriend.

Danielle is the kind of internet presence that we all love to hate, tagging you in photos that you really didn't want shared online, commenting on the most ridiculous posts on facebook, posting her own ridiculous posts (you know the kind, that no one ever wants to read).

She must be stopped.

Although Dave swears that his first killing is accidental, we the readers see a slightly different side to his story.

Once realising that he has gotten away with his crime, Dave returns to the internet, in search of his next victim. He will argue that they deserved to be killed, that the world will be a better place without them.

He will also argue that he never set out to be a serial killer, and that after killing Danielle, he was contacted via the internet by somebody that not only wanted to congratulate his work, but also wanted to enlist his help in ridding the world of people like Danielle.

Dave is a very ordinary bloke, with a very extraordinary hobby of killing people, but he is strangely likeable.

Without giving too much away;

Haterz is a very dark comedy novel, that will leave questioning your own morality as you ask for more.

Haterz by James Goss is available to pre-order now from Amazon online.