Review: The Book of You by Claire Kendal 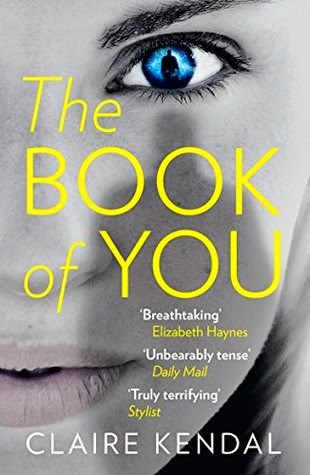 The Book of You by Claire Kendal
Publisher: Harper Collins
Release date: 10 April 2014
Rating: ****
Back cover blurb: Clarissa is becoming more and more frightened of her colleague, Rafe. He won’t leave her alone, and he refuses to take no for an answer. He is always there. Being selected for jury service is a relief. The courtroom is a safe haven, a place where Rafe can’t be. But as a violent tale of kidnap and abuse unfolds, Clarissa begins to see parallels between her own situation and that of the young woman on the witness stand. Realizing that she bears the burden of proof, Clarissa unravels the twisted, macabre fairytale that Rafe has spun around them – and discovers that the ending he envisions is more terrifying than she could have imagined.

The Book of You is Claire Kendal's debut novel and wow, what a debut it is!

A brilliant psyschological thriller, the Book of You, will have you looking over your shoulder without you even realising the effect that the novel has had on you.

the Book of You, is a book that belongs to Clarissa. Clarissa is an academic, an intelligent woman who abandoned her PHD but still works at a University, who loves to sew and read poetry. She works alongside Rafe Soames, a respected lecturer with an unhealthy interest in Clarissa.

the Book of You begins when Clarissa begins to realise that Rafe's overly friendly behaviour towards her is not normal. It begins, as so many of these situations do, with Rafe misreading the signals after a one night stand with Clarissa.

But even then, all is not as it seems. Clarissa can't remember sleeping with Rafe, she barely remembers getting home, and she is certain in her heart that she did not want to sleep with him.

Then Clarissa is called for jury service, a long trial which will leave her free of Rafe for a while. Or so she thinks. As the trial gets underway, Clarissa believes that she is safe. But as the jury begins to hear the evidence, Clarissa realises that the case is a little closer to home than she would have liked.

The evidence she hears has an impact on how she lives her life outside of the court, and as Rafe finds his way back in to Clarissa's everyday life, she realises that she is in even more danger than even she could have imagained.


The Book of You is available to buy now from Amazon online and all good book shops.