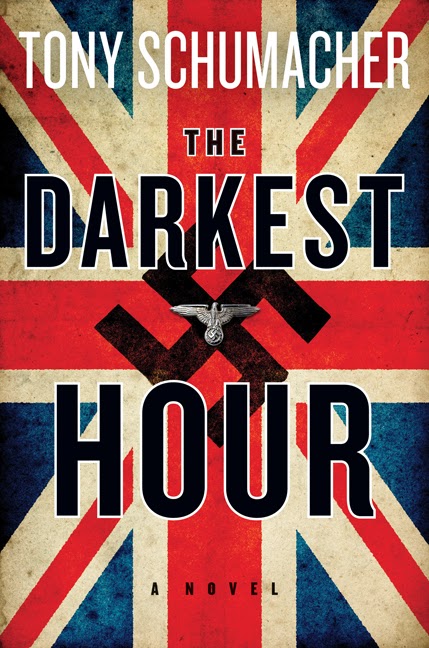 the Darkest Hour by Tony Schumacher
Publisher: William Morrow
Release date: 20 November 2014
Rating: *****
Back cover blurb: London, 1946. The Nazis have conquered the British, and now occupy Great Britain, using brutality and fear to control its citizens. John Henry Rossett, a decorated British war hero and former police sergeant, has been reassigned to the Office of Jewish Affairs. He now answers to the SS, one of the most powerful and terrifying organizations in the Third Reich. Rossett is a man accustomed to obeying commands, but he’s now assigned a job he did not ask for—and cannot refuse: rounding up Jews for deportation, including men and women he’s known his whole life. But they are not the only victims, for the war took Rossett’s wife and son, and shattered his own humanity. Then he finds Jacob, a young Jewish child, hiding in an abandoned building, who touches something in Rossett that he thought was long dead. Contd...

the Darkest Hour is a novel that was very kindly sent to me by Alice Herbert at Harper 360. I love historical fiction as regular readers of my blog will know. But I also love war/post war based fiction, so this novel for me was the perfect combination of the two.

the Darkest Hour is based in post WWII London, and gives an account of just how different life could have been for us all if Germany had won the war.

John Rossett a British former police sergeant (and war hero) is reassigned to the Office of Jewish affairs, and answers to the SS.

He is responsible for the rounding up of Jews for deportation, a task that he is reluctant to do, but knows he must if he is to keep his job, and his life.

A widow after losing his wife and son to a bomb blast during the war, Rossett himself is a lonely figure. He uses his work as an escape and although he acknowledges that what he does a day job is fundamentally wrong, he does not have a choice.

Many of the Jews he is sending away are known to him as Rossett has lived in the area all his life. But he trys not to think about where is sending them to. He says that he doesn't know, but I think that deep down he knows exactly where he is sending the Jews that his bosses so deeply despise.

Why then does he choose to follow the instructions of a shopkeeper that he once knew, to save a child by the name of Jacob who has managed to avoid the clearing out of a Jewish property?

Well, Rossett for me is an extremely likeable character, I think he is fundamentally a good man, who you just know is thinking of his wife and son whilst he is trying to save Jacob from certain death.

An intriguing and chilling insight in to what post WWII Britain could have been, the Darkest Hour is a must read.

the Darkest Hour is available to buy now from Amazon online and all good book shops.

Thank you to Alice Herbert at Harper 360 for sending me a copy of the Darkest Hour in exchange for an honest review.