Review: the Girl in the Photograph by Kate Riordan 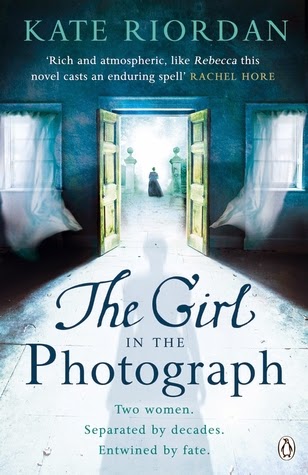 The Girl in the Photograph by Kate Riordan
Publisher: Penguin Books
Release date: 15 January 2015
Rating: *****
Back cover blurb: In the summer of 1933, Alice Eveleigh has arrived at Fiercombe Manor in disgrace. The beautiful house becomes her sanctuary, a place to hide her shame from society in the care of the housekeeper, Mrs Jelphs. But the manor also becomes a place of suspicion, one of secrecy. Something isn't right. Someone is watching. There are secrets that the manor house seems determined to keep. Tragedy haunts the empty rooms and foreboding hangs heavy in the stifling heat. Traces of the previous occupant, Elizabeth Stanton, are everywhere and soon Alice discovers Elizabeth's life eerily mirrors the path she herself is on. The past is set to repeat its sorrows, with devastating consequences.


The Girl in the Photograph is a glorious book.

Ultimately a very beautiful love story set in such a different world to the one that we now inhabit.

A world in which it is a sin to be expecting a child if you are unmarried. Unthinkable if you are expecting the child of a man who is already married and cannot be associated with you.

Unable to go through with a backstreet abortion, Alice has no choice but to tell her Mother of the predicament that she has gotten herself in to. Appalled at her daughters actions, Alice's Mother makes the decision to send her away to have the baby, with relatives in the countryside at Fiercombe Manor.

When she arrives Alice is intrigued by the old manor she find herself in, and even more curious when the housekeeper Mrs Jelphs seems so reluctant to answer any of her questions. Often left alone, and bored with nothing to really occupy her, Alice begins to explore the house and learns about its history and previous occupants including Elizabeth Stanton.

As we learn more about Elizabeth, I must admit that I felt sorry for both Elizabeth and Alice. For although their stories were in different times, life has dealt them both a pretty raw deal.

Elizabeth from the outset had it all; a wealthy handsome husband, beautiful home and daughter. But her marraige was almost certainly loveless, her husband only interested in her ability (or inability) to produce a heir.

Alice, an intelligent woman, loved dearly by her family, until she makes a mistake that has devastating consequences forcing her family to send her away.

Both of them lonely young women facing difficult times alone.

But Alice has a saviour, in the form of a mysterious male member of the Stanton family. I don't want to reveal too much more, but I adored his character and I think the author does an excellent job of making the last part of the novel believable, particularly with what Alice has been through previously. It is a fitting end to such a wonderful tale.

The Girl in the Photograph is an excellent read and one of my stand out historical fiction books so far this year.

The Girl in the Photograph is available to buy now from Amazon online and all good book shops.