Review: No place to Die by Clare Donoghue 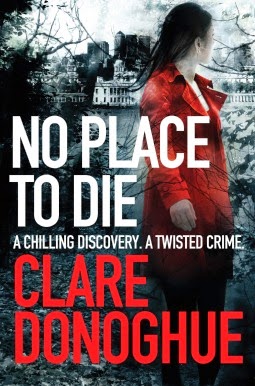 No place to Die by Clare Donoghue
Publisher: Pan Macmillan
Release date: 12 March 2015
Rating: ****
Back cover blurb: DS Jane Bennett takes charge of South London's Lewisham murder squad following the temporary suspension of her boss, DI Mike Lockyer. His involvement with a female witness resulted in her murder. Mike returns to work but he's a shadow of the detective he was a few months before. Bennett gets a desperate call from an old friend to say that her husband, retired colleague Mark Leech, has gone missing. Blood spatters found in the home suggest that she doesn't have long to find him. When Jane is sent to a site in Elmstead Woods she stumbles upon a sinister murder scene. A tomb has been created, and the body she finds is not Mark's - as she dreaded and suspected - but that of missing university student, Maggie Hungerford. Her killer recorded her last moments, even providing an air supply which was only cut off when the game lost its thrill contd...


No place to die is a novel with disturbing crimes at its heart. I've read enough crime novels to not feel too shocked at the idea of the murder victims being buried alive in a tomb whilst being observed dying by their murderer.
DS Jane Bennett is a character that I warmed too immediately. You can feel her nervous anticipation as she is led to the underground tombs with forensic officers in two, the fact that we get to know her family a little I think also warmed me to her. She wasn't the cold hard detective that you see in so many crime novels.
Her superior, Mike Lockyer is quite obviously a troubled character and I feel like I needed to have read the previous novel with him in to understand him a little better, but for this particular novel, the fact that I didn't know him all that well, helped me to understand how DS Bennett was feeling towards him at the beginning of the novel.
Without giving too much away, No place to die centers around the discovery of missing university student, Maggie Hungerford's body and the disappearance of retired police detective Mark Leech.
At first there is little to link the two events and DS Bennett is certain that she has her man (or men-she is largely undecided if they are both involved) in the form of a Universty lecturer and a PHD student, Maggie's former lover, but as the investigation deepens, it becomes clear that all is not as it seems.
Sadly I guessed the murderer within the first few chapters, but I don't think it is obvious at all, I think I have just read far too many (if there is such a thing...) novels of this genre. If I hadn't I think I would've been very surprised by the ending of the novel.
No place to die is a well written story with a great twist, and if I wasn't such an avid crime reader I probably would've given it 5 stars.
No place to die will be released on 12 March and is available to pre-order now from Amazon online and Pan Macmillan.