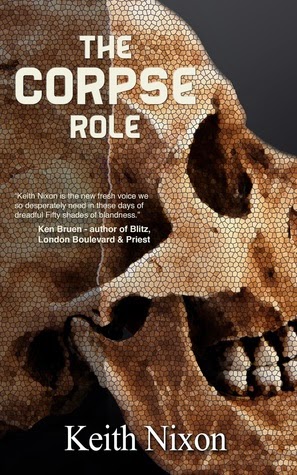 the Corpse Role by Keith Nixon
Publisher: Gladius Press (Kindle edition)
Release date: 10 April 2015
Rating: ****
Back cover blurb: Not everything that gets buried stays buried... sometimes things have a nasty habit of resurfacing… When the body of a security van driver implicated in an unsolved £1.2 million heist turns up in a shallow grave two years later it’s just the beginning for Detective Inspector Charlotte Granger. She embarks on an investigation that takes her into dangerous territory – a world of dirty cops, dodgy private investigators, local villains and nosy journalists. Meanwhile events from Granger's own past are threatening to come back and haunt her...


So my review today comes to you courtesy of a blog tour to celebrate the release of Keith Nixon's latest novel the Corpse Role.

When Paul Wheeler’s body is discovered DI Charlotte Granger is called in to investigate. Charlotte quickly discovers that ex-cop Christopher White’s details are on the deceased.

There might be nothing unusual in this, for Wheeler is implicated in an unsolved heist dating back two years, but it is not White’s police details that are on the card; it is his new details as a Private Investigator.

When White himself turns up dead the case takes on a whole new direction. Someone wanting an ex-criminal dead is a very different story to wanting an ex-copper dead. Or is it?

The Corpse Role is a difficult novel to describe/review without giving too much away. DI Granger is a brilliant character who uses some surprising tactics to achieve results.

The ending of the novel should have come as no surprise, but it did. It is a brilliant twist and sets it apart from other crime novels of similar content.


As part of the blog tour I will be giving away a copy of the Corpse Role over on Twitter today so make sure you are following me to be in with a chance of winning!

The Corpse Role is available to buy now from Amazon online.

Thank you to Liz and Keith for allowing me to be part of the blog tour.