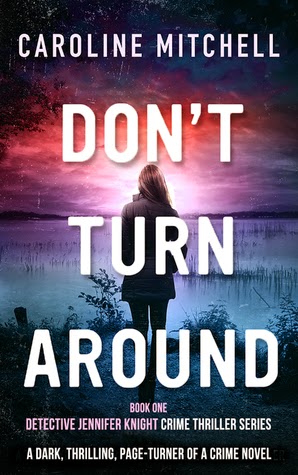 Don't Turn Around by Caroline Mitchell
Publisher: Bookouture
Release date: 24 April 2015
Rating: *** and a half
Back cover blurb: You don’t know him. But he knows you. Soon he would be able to touch her, to feel the warmth of her blood. And when the time came, nothing would stop him. As D.C. Jennifer Knight investigates a routine stabbing in the quiet town of Haven, she is shocked at what seems like a personal message from beyond the grave. When more bodies are found, Jennifer is convinced the killings are somehow linked. What she discovers is more chilling than she could possibly imagine. The murders mirror those of the notorious Grim Reaper – from over twenty years ago. A killer her mother helped convict. Jennifer can no longer ignore the personal connection. Is there a copycat killer at work? Was the wrong man convicted? Or is there something more sinister at play …With her mother’s terrifying legacy spiralling out of control, Jennifer must look into her own dark past in a fight not only to stop a killer – but to save herself and those she loves.

Don't Turn Around by Caroline Mitchell, is not your average Crime thriller. It contains a strong hint of the paranormal, which I am not usually a fan of. Thankfully it works well within the context of the novel, and it wasn't too overpowering - which was what I was concerned about.

Jennifer Knight is called in to investigate a stabbing; the victim, a well known local ex-boxer, the perpetrator the equally well known local criminal Johnny Mallet. The crime seems cut and dry, a standard police case in the quiet town of Haven.

But then Johnny Mallet is found dead in a suspected suicide case, Jennifer begins to see and hear things that she hasn't experienced for years, and it all becomes a lot more interesting. As more people begin to lose their lives in seemingly unsuspicious circumstances, Jennifer begins to see paraellels with a murder investigation that her mother undertook some twenty plus years before.

Jennifer though must tread carefully, as she has been moved to Haven from a previous police role after voicing her paranormal beliefs. Not wanting to upset the apple cart but determined to solve the crime, convinced that they are only looking for one killer, Jennifer confides in her colleague Will. Who she knows will believe in her no matter what.

Jennifer Knight is a brilliant detective and her relationship with her colleague Will is excellent. If any two characters in a book should be together then its those two! Sadly any fledgling relationship they may have had is upset by the arrival of Ethan who has been sent to shadow Jennifer in her work. Young, goodlooking and great at his job, Will can't help but feel a little threatened by Ethan, and there are a few scenes that left me wondering whose side I was actually on?!

Don't Turn Around's ending was one I was not expecting, but it is one that has left a huge door open for a great future for Jennifer Knight and I can't wait to see where she goes next.

Don't Turn Around is released on 24 April 2015 and available to pre-order now from Amazon online.