Review: How I Lost You by Jenny Blackhurst 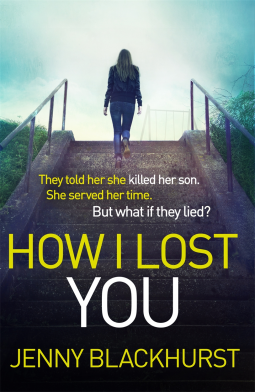 How I Lost You by Jenny Blackhurst
Publisher: Headline
Release date: 23 April 2015
Rating: ****
Back cover blurb: They told her she killed her son. She served her time. But what if they lied? I have no memory of what happened but I was told I killed my son. And you believe what your loved ones, your doctor and the police tell you, don't you? My name is Emma Cartwright. Three years ago I was Susan Webster, and I murdered my twelve-week-old son Dylan. I was sent to Oakdale Psychiatric Institute for my crime, and four weeks ago I was released early on parole with a new identity, address and a chance to rebuild my shattered life. This morning, I received an envelope addressed to Susan Webster. Inside it was a photograph of a toddler called Dylan. Now I am questioning everything I believe because if I have no memory of the event, how can I truly believe he's dead? If there was the smallest chance your son was alive, what would you do to get him back?
Emma Cartwright has no memory of killing her baby son Dylan, yet here she is four years on having been released from a psychiatric unit having been accused of doing just that. With her best friend from the unit Cass, close by, Emma tries to rebuild her life. But somebody is determined to stop her doing this and wants to drag her back in to the past.

When Emma recieves a photograph to her new address addressed to Susan Webster, her previous identity, she is shocked, but what shocks her even more than somebody knowing where she now resides when she supposedly has a new identity, is the subject of the photograph. It is her son, Dylan in 2013 (the present day of the novel). Alive.

Matters take a turn for the worse when a journalist turns up on her doorstep, after 'Susan's' side of the story. Inexplicably Emma decides to go against all her principles, take a chance and trust Nick. Is it a decision she will come to regret? Or is Nick the key to her future? Is Dylan alive or is it just someone's idea of a sick joke?

I thought I knew for quite a while the direction that this novel was going in until the point that we meet Emma/Susan's ex-husband. And then I really began to wonder....

A novel where no one is who they appear to be (most certainly not the 'villain') except perhapes Emma/Susan herself. How I Lost You is an emotional rollercoaster of a psychological thriller and I was in tears by the end.

What a brilliantly written debut. I cannot wait to read more from this author.
How I Lost You is available to pre-order now from Amazon online.