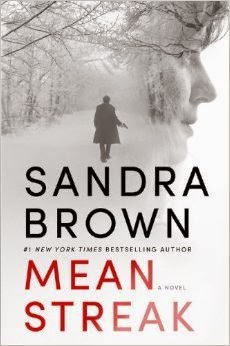 Mean Streak by Sandra Brown
Publisher: Hodder & Stoughton
Release date: 28 August 2014
Rating: *** and a half stars
Back cover blurb: Dr. Emory Charbonneau, a pediatrician and marathon runner, disappears on a mountain road in North Carolina. By the time her husband Jeff, miffed over a recent argument, reports her missing, the trail has grown cold. Literally. Fog and ice encapsulate the mountainous wilderness and paralyze the search for her. While police suspect Jeff of "instant divorce," Emory, suffering from an unexplained head injury, regains consciousness and finds herself the captive of a man whose violent past is so dark that he won't even tell her his name. She's determined to escape him, and willing to take any risks necessary to survive. Unexpectedly, however, the two have a dangerous encounter with people who adhere to a code of justice all their own. At the center of the dispute is a desperate young woman whom Emory can't turn her back on, contd.

Mean Streak is a book that has been on my 'to be read' list for an awfully long time, and would probably still be on it if I hadn't been prompted it to read it as part of an online book group.

Mean Streak is a strange novel, on one hand it reminded me a little of some of Tess Gerrittsen's work, on the other it was unlike anything I had ever read before. And whilst I really wanted there to be a happy ending, I was kind of disappointed by the novels ending and felt there could have been more depth to it.

Dr. Emory Charbonneau is an avid runner, some might say fanatical. But Emory would disagree, as she does with her husband the night before setting off in to mountains of North Carolina to practice running at Altitude. It is more than the usual husband/wife disagreement, and not for the first time Emory wonders if her husband is having an affair.

She has little time to ponder this as early the next morning whilst on her first run, she is brutually attacked and ends up in a strangers cabin. Her captor insists that he won't hurt her. But when he won't even divulge his name, Emory feels less than safe.

Emory's husband meanwhile, is with his mistress, Emory's best friend and one of the co-owners of Emory's medical practice; Alice. When Emory fails to return home as expected, Emory's husband, Jeff begins to fear that something may have happened to her.

The local police are suspicious of Jeff when he turns up on their doorstep looking for Emory. They are distinctly unimpressed by his attitude and character and wonder if he just wanted to get rid of his wife in an 'instant divorce'.

Meanwhile Emory is beginning to trust the man who insists he saved her life, bringing her in off the mountainous terrain where she had been attacked and left for dead. Emory desperately wants to believe him, but if he didn't attack her, then who did? And why won't he let her go or tell her his name?

Mean Streak is available to buy now from Amazon online and all good book shops.