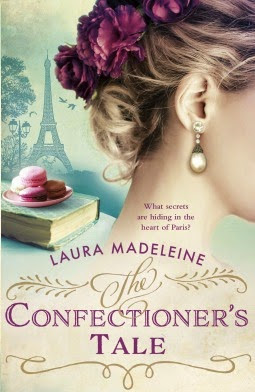 the Confectioner's Tale by Laura Madeline
Publisher: Black Swan
Release date: 23 April 2015
Rating: ****
Back cover blurb: What secrets are hiding in the heart of Paris? At the famous Patisserie Clermont in Paris, 1909, a chance encounter with the owner’s daughter has given one young man a glimpse into a life he never knew existed: of sweet cream and melted chocolate, golden caramel and powdered sugar, of pastry light as air. But it is not just the art of confectionery that holds him captive, and soon a forbidden love affair begins. Almost eighty years later, an academic discovers a hidden photograph of her grandfather as a young man with two people she has never seen before. Scrawled on the back of the picture are the words ‘Forgive me’. Unable to resist the mystery behind it, she begins to unravel the story of two star-crossed lovers and one irrevocable betrayal.

Cambridge, 1988. Petra Stevenson is studying for a PHD. She is distracted by Hall, the man who has been appointed as her Grandfather's official Biographer. Petra is convinced that Hall only wants to make money from a possible scandal that her Grandfather was involved in in Paris in the early 1900s and is determined to do everything she can to stop him.

Paris 1909. Guillaume (or Gui) Du Frere is working on the railways as a labourer when he by chance meets Mademoiselle Jeanne Clermont, the daughter of a famous Parisienne confectioner. Their backgrounds could not be more different, Gui sends money home to his Mother every pay day and sleeps alongside the other labourers in a hut near the Railway. Jeanne lives an opulent existence, having had a privilege upbringing. But there is a connection between them.

When Gui saves Jeanne's life during the despair of the Paris floods, her Father is desperate to avoid a scandal. He offers Gui money to stay quiet, but Gui asks for something he wants more than money; a chance to be close to Jeanne, and the exquisite artwork of the patisserie. He wants a job.

Jeanne's Father is happy to oblige thinking that Gui will be poor at the job, and will soon be out on his ear. But Gui's cold labourers hands make him a natural with pastry work, and soon he is moving upwards from the lowest ranks of the kitchen. But of course Gui's real reason for working so hard in the kitchen is for the chance to see Jeanne.

As Petra puts together pieces of her Grandfather's history together like a puzzle from old photographs and letters she begins to wonder what exactly in Paris, a place she can't ever recall her Grandfather discussing. Letters from .J.G. Stevenson to G Du Frere suggest every hint of the scandal that Hall is trying to dig up, but Petra is convinced there is more to the letters than meets the eye. But can she uncover the truth before her Grandfather's name is tainted forever?

The Confectioner's Tale is a beautiful novel both inside and out, and will leave you wanting to visit a Parisien Patisserie immediately.

the Confectioner's Tale is available to buy now from Amazon online and all good book shops.