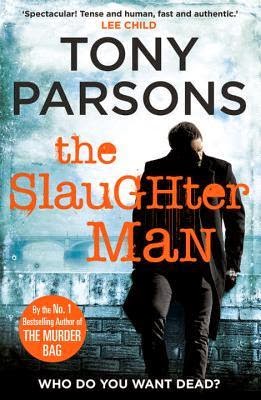 Back cover blurb: On New Year’s Day, a wealthy family is found slaughtered inside their exclusive gated community in north London, their youngest child stolen away. The murder weapon – a gun for stunning cattle before they are butchered – leads Detective Max Wolfe to a dusty corner of Scotland Yard’s Black Museum devoted to a killer who thirty years ago was known as the Slaughter Man. But the Slaughter Man has done his time, and is now old and dying. Can he really be back in the game? And was the murder of a happy family a mindless killing spree, a grotesque homage by a copycat killer–or a contract hit designed to frame a dying man? All Max knows is that he needs to find the missing child and stop the killer before he destroys another innocent family–or finds his way to his own front door .. A murdered family. A dying serial killer. A missing child. And a detective who must learn that even the happiest of families have black, twisted secrets that someone is ready to kill for…


The Slaughter Man is the second novel by Tony Parsons to feature DC Max Wolfe. Wolfe is my absolute favourite detective of the moment. He is so refreshingly normal that it is easy to identify with him. He has a sensitivity that is rare in detective novels and his relationship with his daughter is adorable.

The Slaughter Man of the novel's title, is ultimately a murderer responsible for the death of a wealthy London family, the Woods.

Behind a gated community in Highgate, the family are enjoying a quiet New Years Eve together, before their peace is shattered, forever. Mary Wood a former winter Olympian, her husband Brad, a former US winter Olympian and their two children; Marlon and Piper, all wiped out in a cold and calculated deliberate massacre.

When DC Max Wolfe and his team arrive, even they as experienced detectives are shocked at the carnage they encounter. Initially Max suspects that they have all been shot at point blank range, and their injuries seem to confirm this. Until the forensic team get their hands on the bodies and conclude that the truth is much worse.

The family have been slaughtered by an unusual weapon, a gun usually used to stun cattle, not the usual weapon of choice for a serial or spree killer. When Max visits his familar haunt; the Black Museum, he is intrigued to find a similar case dating back some thirty years ago. Suddenly they have themselves a prime suspect, but does he have a motive?

The investigative team dig up a series of links and unexplained occurences that could indeed link the Slaughter Man to the Woods' murders. But are they clutching at straws? And is the real murderer still at large with a desire to kill that still hasn't been satisifed?

Max and his team have difficult times ahead as they try to find the answers and hope against hope that they can find Bradley Woods alive. A truly brilliant novel from start to finish, the Slaughter Man may just be my favourite detective led novel this year.

A definite must read. Add it to your reading lists now crime fans!

the Slaughter Man is available from 21 May.
You can pre-order it now from Random House UK and Amazon Online.